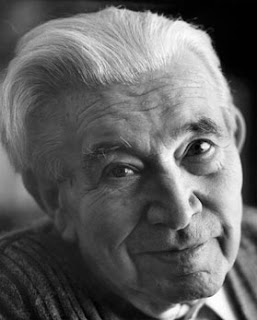 Born into a poor Czech family, Jaroslav Seifert grew up in Žižkov, a suburb of Prague. His mother was a devout Catholic, but his own inclinations led him to explore the busy city life of the streets and bars.

His first book of poetry, Město v slzách (1921, City of Tears) spoke to the proletariat, the young poet looking back over World War I and urging revolution. But in 1923, Seifert traveled to Paris, and immediately fell in love with the city. There he translated works by Guillaume Apollinaire, and moved from his politically based poetry to Czech “pietism,” which stressed values of joy, sensuality, and play in poetry as an antidote to the bourgeois society. His second book, Samá láska (1923, All Love), marked his transition to a more privately based poetics. And his third collection, Na vlnách T.S.F., broadcast in 1925 on the French radio and republished as Svatební cesta (1938, The Wedding Trip), most clearly fulfills the aesthetics of “poeticism,” and, with its Dada-like spirit, had a tremendous influence upon the avant-garde poems “The Power of Nine” and Czech poetry in general.

A 1925 journey to the USSR resulted in a more traditionally based work, Slavík zpívá špatně (1926, The Nightingale Sings Badly). But despite his references to Lenin and European nationalism, the work was considered reactionary. When he refused in 1929 to follow the Moscow line of opposition to the Czechoslovak Republic, he was ousted from the Communist Party. The same year he produced Poštovní holub (1929, The Carrier Pigeon), which showed a refinement of his lyric abilities combined with references to Czech poetic tradition.

During the war years, Seifert was editor of the Trade Union newspaper Práce, but his relationship with the Communist Party remained in turmoil, and his poem mourning the death of Communist poet František Halas brought him the criticism of being too subjective. His poetry was ignored by the press. Elected president of the Union of Czechoslovak Writers, he was removed from office during the years of “normalization” with the Soviet Union. In 1984, at the age of 83, Seifert was awarded the Nobel Prize for Literature.