Henrikas Radauskas (Lithuania/USA)
1910-1970
Born in 1910, Henrikas Radauskas spent his childhood in a village near Panevėžys in the north-central part of Lithuania. His family moved to Siberia at the beginning of World War I, and it was there he attended elementary school. 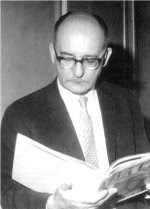 In 1921 he returned to Lithuania, graduating from Panevėžys high school, and, in 1929, graduated from the Teachers Institute there. For a short period of time he taught school, and then entered the University of Kaunas. After completing his studies, he became a radio announcer and a copy editor in Kaunas.
In 1937 he assumed the editorship of the publications division of the Lithuanian Ministry of Education. In 1944, Radauskas, like many other Lithuanians before him, attempted to emigrate to the Soviet Union; but he and his wife were caught between the retreating Nazis and the advancing Red Army, and were forced to settle in Germany, first in Berlin and later in Reutlingen by the French and Swiss borders.
In 1949 they emigrated to the United States, spending a year in Baltimore before settling in Chicago. American life was difficult for the couple, and he labored for ten years as a machine operator for a company that produced chairs before being able to secure a job as a translator and copy editor at the Library of Congress in Washington, D.C.─ a job he held until his death in 1970.
Radauskas published only four books of poetry, but they were of sufficient merit to establish him as a major Lithuanian poet in an artistic scene of great sophistication. Other major Lithuanian poets, both émigrés and those writing in Lithuania, wrote poetry grounded in traditional German and Lithuanian conventions; but, as Radauskas's translator has written, "Radauskas sought to shape the things of the world as he saw them into a personal universe, a controlled place which the terrors of history...could be mitigated and overcome." The result is a poetry that at times seems highly influenced by surrealism, but is, nonetheless, highly idiosyncratic, closer to a vision of the naïve artist who compresses images and time to create a work of stunning originality.
BOOKS OF POETRY
Fontanas (1935); Strėlė danguje (1950); Žiemos daina (1955); Žaibai ir vėjai (1965)
ENGLISH LANGUAGE TRANSLATIONS Chimeras in the Tower: Selected Poems of Henrikas Radauskas, translated by Jonas Zdanys (Middletown, Connecticut: Wesleyan University Press, 1986)
Sunday
In a room dead for twenty years
An old woman's shadow yawns, turns an empty
Coffee grinder, the clock shows Sunday,
The cuckoo quieted, stabbed a guest in the inn.
A sleep woman reads a scorched book:
The Terrible History of Demon Belphegor.
In her palms are Saturn's broken lines.
The double walls are filled with ducats and bones.
An anemic voice runs up the cellar stairs,
Coloratura dripping candles and tears.
The wall rips, the rubber girl falls,
Violins carry the bloody heart to the garden.
A giant laughing maple knocks at the ruddy
Coffin decorated with flutes and fioritaura.
Poveri fiori. Poisoned violets faint.
The shadow of the voice runs to vanished house.
-Translated from the Lithuanian by Jonas Zdanys
Harbor
Locked up in a midday hard as diamond
My eyes begin to fail.
The shore is charged with a fierce light:
A holiday of nails, broken glass, daggers--
Who will give me a helping hand?
And streamer and locomotive
Sirens carve the rippled air,
And crabs and lobsters crawl
Between the fishermen's stone hands,
And a crowd of screaming blacks
Pierces me like knives.
The shore is charged with a hot light.
Who will cover the fire with clouds,
Help me to wait for the cold night?
A holiday of lightning, flames, embers.
And the ocean rocks with boats
And glitters with crooked mirrors.
-Translated from the Lithuanian by Jonas Zdanys
Conversation of Dogs
Through darkening telegraph poles
At the crossroads, near grey piles of gravel,
I see frail farmsteads scattered
Against the dimmed autumn background.
Beyond the highway, beyond the falling birches,
A shepherd's voice in the marsh throbs among ferns.
Rain drips slowly
From the horses's manes.
In the woods woodpecker knocks don't knock.
Evening fell beyond the clouds.
Things died out.
It's dark.
Who threw me into this darkness?
I walk splashing invisible puddles.
Somewhere far off, beyond the horizon
Conversations of dogs.
-Translated from the Lithuanian by Jonas Zdanys
Posted by Douglas Messerli at 1:57 AM

This is wonderful posting. Thank you.

I discovered Henrikas Radauskas today rather by accident, as I was doing some research on another poet. When I Google him, not many English pages come up, so it seems he's not that well known, though I did find some pages of his translated poems. Interesting, anyway. I quite enjoyed a few, so I will be reading the others over the next few days.
Thanks for this post, too - I know it's old, but Google showed it to me.. ;)