Born in Lebus an der Oder, in eastern Germany, in 1907, Günter Eich was one of the major post-war figures of Germany poetry and radio.

In 1918 his family moved to Berlin, and eight years, Eich graduating from a gymnasium in Leipzig, began studying Chinese at the University of Berlin. In 1927 he transferred to the Leipzig University, where he joined his interest in sinology to economics. In the year 1929-1930 he took courses in sinology at the Sorbonne in Paris, and continued his studies in economics, without completing his degree.

His involvement in lyric poetry began at the University of Berlin, and it was there, with Martin Raschke, he wrote his first radio play. From that period until the outbreak of World War II, he was involved with Berlin Radio. 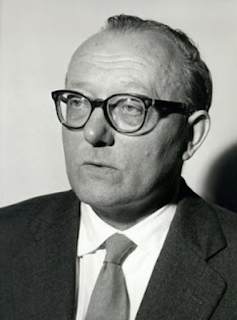 During the war Eich served on the Russian front, and was taken prisoner by the Americans in 1945. In the POW camp he continued his lyric writing. And upon his release he settled in Bavaria, joining, the following year, the now famed Gruppe 47 (Group 47), a loose association of postwar German authors. In 1950 he won the Gruppe 47 prize for his radio play "Geh nich nach El Kuwehd!" ("Do Not Go to Kuwait").

His first postwar poetry collections were published in 1948 and 1949. Abglegene Gehöfte (Remote Farmsteads) and Untergrundbahn (Subway) both perfectly captured the sentiments of postwar Germany, a country in chaos and deprivation. Eich's writing, while at times highly lyrical, also contained a keen sense of observation and wit that exposed hyprocisy and easy answers. His poem "Inventory" was among the most popular postwar poems.

In 1953 he married the German writer Ilse Aichinger. His most important collection, Botschaften des Regens (Messages of the Rain) was published in 1955; once again Eich took experiences from everyday life and infused them with a great sense of mysteriousness and wonder. His later work moved toward a more pessimistic view of human race, and, at the same time, a fragmentation of lyrical forms. The pattern of his poetry once again suited the period of rebellion against the older generation, and made Eich a popular poet among younger readers as well.

At the time of his death in 1972, he was living in Gross-Gmain, Austria.

Posted by Douglas Messerli at 1:33 AM