Born in Milan in 1934, Giulia Nicolai’s mother was an American and her father an Italian, and, accordingly, she grew up learning to speak both languages. Later she learned German and French.

She began her professional career as a photographer, with works in various magazines such as Life, Paris Match, and Der Spiegel. In 1966 she published her first novel, Il grande angolo (1966) and in 1969 her first book of poetry. Associated with the neo-avanat-garde Gruppo 63, she founded, with poet Adriano Spatola, the avant-garde journal Tam Tam. 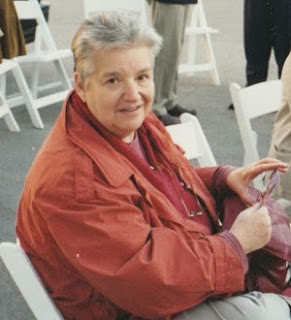 Her poetry has appeared in numerous anthologies and journals. Her work, influenced by her Tibetan Mahayana Buddhism, often bridges her literary and spiritual experiences.

have a meaning or not have one.

It does not propose truth

it keeps the meaning open

the sense of things comes by speaking.

The measure of a page

a communication of forms

the hypothesis of a reality in motion:

a vertigo of infinite

And that which is opposed

may be always overturned

—Translated from the Italian by Paul Vangelisti and the author

The Subject Is the Language

An idea of vengeance: the retaliation

or revenge of the word which has been thought

(make the gesture of inventing language

perform the act by which you appropriate language).

Though dependent or superimposed

the individual and the word exist as separate objects:

not a mutual agreement of words and things

but the pleasure of interfering.

Things exist to be said

and language narrates. It outrages in turn

a language already violated by others

to possess language is a way of being.

The subject is therefore the language

with which to commit a capital offense.

—Translated from the Italian by Paul Vangelisti and the author

The electronic brain’s “subconscious” that had

for those words, verbs, initials etc. which they

under no circumstances wanted to be discovered

writing or uttering, had, as it should, a weakness

for the great characters of tragic drama, particularly

Hamlet, Portia, and many others.

For his part time, Shakespeare instead

gossip-mongering) who, in Henry IV,

plays the role of the announcer (here we quote

the opening lines of the prologue to part II):

Rum. Open your ears; for which of you will stop

The vent of hearing when loud Rumour speaks?

following as worth rereading in this

light). From a structural perspective, further

examining the coded terms in the little black book,

we realize they may be subdivided into three other

monsosyllabic and onomatopoeic which sometimes

correspond to the written sounds of American comics

such as: sob (which in English means to cry, to make

a weeping sound), jab (to knife), tap (to knock on

Given the richness of the material present in

*Rumor: the name of an Italian Prime Minister involved in the Lockheed scandal

And that these texts, with a simultaneous translation

Of the cryptic word into its actual meaning

or wordplay in two or more voices as in a sort

of naval battle of words. But to classify and

in all their possible combinations

another electronic brain is clearly

is composed exclusively of words taken

(in their coded meaning) from the little black book

it uses the names of Shakespearian characters

here present and may be read as a ballad or

an epilogue to a hybrid of tragedies

The jonquil, the ladybird , the opal oriole

The tidal ebb. Woe to Hamlet, the moonbeam

Upon his silver sword, the bleak phantom’s vox,

The prophet’s raven cloak, the hemlock

And the hammer hard. An ode to Juliet

To Portia, to the actors in the barnyard.

—Translated from the Italian by Paul Vangelisti

messenger of the gods of Cazadero Valley

I too happened to say

“There’s something rotten in the state of Denmark.”

It’s good to do it also with arms and legs.

ought to come out in English:

“Blessed are the half-wits.”

Instead it’s “Blessed are the poor in spirit.”

(Yet another reason for me to drink a lot.)

Presidents of the United States

when they speak to the American people,

always fix on a spot above the camera lens.

But do they have their feet on the ground?

Careful that the Frisbees

The order in which they follow each other is important.

Certainly there may be something

Still elusive in all this

Be it for you and for me!

I am becoming a socially committed poetess.

Am I becoming a socially committed poetess?

To be able to establish

in the light of day

that even my own presumption

is a most lovely thing.

I suggest listening to Bach

For arthritics and rheumatics.

as it enters your bones.

so as to hear the vibrations

even with the bones.)

Let’s think of the brain

as a shriveled prune.

Immerse it in Bach.

It swells and pulses

Bach is beautiful to have in the blood.

The organist and clavichordist

What else could he do?

The way I walk

has always made me wear down

the outside edge of the

heels of my shoes.

I wish to begin wearing down a little

To even things out.

I wish also the Frisbees

Do I ask too much?

to start calling them

A Frisbee of head or legs?

And why didn’t I write

A Frisbee of legs or head?

are always a little problematic.)

Yeah, a dirty-minded one.

and here we’re on easy ground

(We’re still along way from satori.)

I wouldn’t want the Frisbees

To be my last will.

Certainly, they have something

Of the exquisite corpse about them.

I called my father affectionately “Rhinoceros,”

Years after his death

I dreamt of a Rhinoceros

Sniffing with his horn

At a poppy in a field.

And he got furious,

because with his horn (plugged up)

he couldn’t smell the perfume.

that poppies have no smell

but I didn’t dare go near the Rhinoceros

The rhinoceros in the distance

Then in anger with contempt,

he pissed on the poppy.

He let go on to p of it a long mighty piss.

And now we have a Roman Polanski Pope.

It was Paul Vangelisti

who made me understand

that Poles and Italians resemble each other.

Petrus, where are you?

I missed you at the Pasticceria.

They make an excellent Paradise cake,

There was on the window-sill

A can of Oranjeboom beer.

Black can I notice

looking out the window

when the pavement too

is black with rain.

I say: “How much alike

and how beautiful they are

the black of the can

and the black of the pavement.”

Then I notice the little orange tree

the Dutch House of Orange.

(and here I’m not sure if it’s the fault

and who in Les yeux ouverts

I tell the cashier at the Scimmie

I want to pay for two reds.

(He must be very politicized).

Soon after at the bara

Could these be then

How many hours must I stay at the bar

how many reds must I drink

What liberties it takes!

To explain to her woman friends

How little she knew Italian,

My mother would always say:

“I give tu to strangers

and lei my husband.”

“Positive & Negative” and “The Subject Is the Language”

“The Lockheed Ballad” and “from Frisbees”

Posted by Douglas Messerli at 2:33 AM