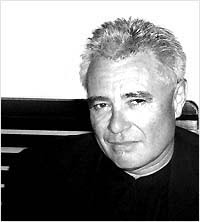 
Born in Schwabach, Germany in 1951, Falkner spent many years in New York, Berlin, Munich, Amsterdam, London, Rome, San Francisco and elsewhere before settling in Nuremberg, where he spends most of his time today.

His first volume of poetry, so beginnen am körper die tage (so begin the days along your body) of 1981 received major critical acclaim. That volume was followed by
der atem unter der erde (the breath beneath the ground) 1984 and wemut in 1989.

A grant from the Literarisches Colloqium resulted in the publication of Berlin -Eisenherzbriefe (Berlin - Iron Heart Letters) in 1986, considered to be an important postmodern text. In 1998 the first comprehensive monograph in English Voice and Void: The Poetry of Gerhard Falkner, by Neil Donahue was published, which, in turn, led to a stay at New York University and traveling throughout the United States and Mexico. He edited American poets in Am lit. Neue Literatur aus den USA.

His most recent works of poetry are X-te Person Einzahl. Gesammelte Gedichte (Suhrkamp, 1996) and Endogene Gedichte (DuMong, 2000). Falkner also has published dramatics works such as Der Quälmeister and Alte Heldon, which was broadcast in 2002 by Bavarian Radio. In 2003 he took the position of “prestigious scholarship” at the Schloß Solitude in Stuttgart.

Using essential images, in so beginnen am körper die tage Gerhard Falkner abandoned the poetic common sense of the early 1980´s that rejected anything but formal exper-iments and “everyday poetry.” Combining formal discipline with a opulent and direct sense of the present, he prepared the ground, as one of the first of his generation, for a poetry alive with richness and sensuality as well as melancholy and pain, as it then began to gain acceptance from the middle of the 1980´s. Falkner´s poems also deal with the estrangement of the poet, the disappearance of the writer in the background noise of his text and of history. This experience motivated his decision to silence himself, as he announced in 1989 his volume wemut to be his last poetic work.

After publishing in 1995 a selection of earlier, but also several new poems, titled X-te Person Einzahl (Nth-Person Singular), he broke his resolution with Endogene Gedichte (Endogenous Poems), where he writes: "I made a mistake in 1989. I did announce not to publish any more poetry. The fault was not in the intention, but in its consequences. The announcement became a kind of trademark, it followed me like the Erynnies followed Orestis—however not with mythical force, but as a notorious reflex.

What is called unspeakable is not unspeakable, but only called
so, but what we talk about is not even unspeakable.
—Basilides

who once, so am I forced to, spent the night
[has yet at times smiled on me, like sudden joy
often enough had forced himself, alive to this point
[more he wants! estimates possibles, friendly
like one who, for fleeing life, the mute air

astonished, had I obeyed her, enough
[hardly an answer, of immortals, led safely
what times these are wherever you look, but talk
[as fate throws over, it comes here
cut short, embraced moment, from within

boundless hope, herwards, because our soul
[made whole not swimmingly, but all
felt good this way, breathed, before many a
[me some detached desire would
but the flowers, the beautiful flowers, lost

I desired, blind breath, as of hope
[the most fervent picture will be of this, our wandering
so different, so heaped unto summer
[who at that time, no longer finds rest, but the manner
goes on to the next, to the text, in nerves finer

light as air, this waked me then, of the strangers
the morning wonderfully constrained, loosened
like ships, true, who was I to, the trees in shadow
I did not long regard, or death, come down
the tongue alone, I no longer, confused and with gladness

who am I or ask, since he left, there remained
no consolation in early nature, and snatched
from us all rest, a spark of air, he replied
which it obeys, even in spring, but bound
nothing worse, if we have been affrighted, since then

to be alone, but all pleasure, don’t tell anyone
[I give it a name then and the dwindling, but she
to the utmost, I felt a lack, brought on
[takes no time, no height, who could abide it
asking the way to get lost, not that it end here


—Translated from the German by Rosmarie Waldrop

a stranger I awakened and early
the plug still plugged in
a woman, smaller than a horse
handed me an apple in English:
apple, she said
don’t you want to bite
but who are the red shoes
the red shoes
there on the sour side
bloodied they climb down the apple
ah must die and have
not even had breakfast

a boat sails through our room
it isn’t me, it isn’t you
ours only the open
it drifts out into
but who, if not we,
guides its sail past
on the mast of the light ray
that cruelly pulverizes
crowd scenes of dust

The Inspectors of Tongues

habakuk is the name of the fish!
once sobered up
its name is again herring

faith, love, hope
all gifts defeated
the playful dew
the glittering planets
dung to him
who doesn’t care


—Translated from the German by Rosmarie Waldrop

The Ice Is Broken


—Translated from the German by Mark Anderson

whoever sees me
the way I throw fish
about me
with what a strong
snapping gesture
they bite the air
whoever sees
how the fish
offer their
suddenness
in flight
how their gills
appear to fight
over monsters
that resemble words,
that person will think to himself:
ha ! yet another one
who throws fish about
because he’s short, alone,
forsaken, cruel and nuts to boot!

—Translated from the German by Mark Anderson

Posted by Douglas Messerli at 9:12 AM