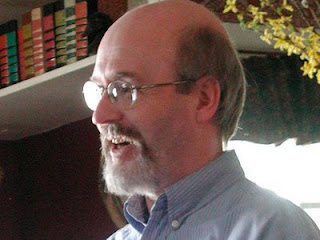 Ger Killeen was born in Ireland in 1960. He was educated at University College, Dublin and the University of London. He now lives on the Oregon coast and is a professor in the Department of Literature and Writing at Marylhurst University.

His books include A Wren, which won the 1989 Bluestem Award for Poetry, A Stone that Will Leap over Waves (1999), and his latest, Signs Following (2005). His poetry has been anthologized in From Here We Speak, On the Counterscarp, and American Poetry: The Next Generation. Killeen has also published translations of the Galician poet, Alvaro Cunqueiro.

Killeen writes that at present he sees his poetic practice as a kind of paradoxical restorative unraveling: “The holes and gaps that remain when the threads of fakery and oppression have been pulled out of the fabric of language and narrative structure leave room for new imaginative and truer weavings of language that might serve to provide us with the outlines of a more inclusive, nonviolent, demythologized narrative, a hugely capacious and liberating story we can inhabit in recognition both of each other’s autonomy and kinship.”

its voice, and the meanings

a city of one dream. Think

of sleep as a fire

sunk in lovely skulls. So many

eyes the color of parchment

on spires, on ramparts,

so many chilling nights

Posted by Douglas Messerli at 11:19 AM