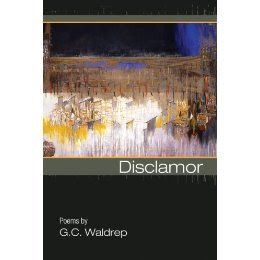 Born in 1968 in South Boston, Virginia, G. C. Waldrep attended Harvard as an undergraduate and earned a Ph.D. in American history from Duke University.

He began writing poetry in 1995. His first book of poems, Goldbeater's Skin, won the 2003 Colorado Prize for Poetry, judged by Donald Revell. His second full-length collection, Disclamor, appeared from BOA Editions in 2007. His third, Archicembalo, won the 2008 Dorset Prize, judged by C.D. Wright, and is due out from Tupelo Press in 2009. He is also the author of two chapbooks, The Batteries (New Michigan Press, 2006) and One Way No Exit (Tarpaulin Sky, 2008).

His poems have appeared in Poetry, Ploughshares, American Poetry Review, Boston Review, New England Review, Colorado Review, Denver Quarterly, American Letters & Commentary, Tin House, Hambone, Aufgabe, New American Writing, and other journals. His work has received awards from the Academy of American Poets, the Poetry Society of America, the North Carolina Arts Council, the Campbell Corner Foundation, and the Bread Loaf Writers’ Conference, as well as a Pushcart Prize. He was a 2007 National Endowment for the Arts Fellow in Literature.

As a historian, Waldrep is interested in the intersection between the emotional and spiritual lives of working-class people in the American South. His book Southern Worker and the Search for Community (University of Illinois Press, 2000) was grounded in over four hundred oral interviews with former textile workers in Spartanburg County, South Carolina.

Waldrep earned an MFA from the University of Iowa Writers Workshop in 2005 and subsequently taught at Deep Springs College and Kenyon College. Currently he lives in Lewisburg, Pa., where he teaches at Bucknell University and directs the Bucknell Seminar for Younger Poets. He also serves as Editor-at-Large for The Kenyon Review.

From 1995 to late 2000, Waldrep lived in the New Order Amish community at Yanceyville, North Carolina, where he worked variously as a carpenter’s helper, window-maker, and baker. Since 2005 he has been affiliated with a related Anabaptist group, the Old Order River Brethren.


What Is a Metaphor

A humorous joke at the expense of this month's endangered species. Walking by the lagoon it seems improbable: that we laugh? That we remain silent? That we walk at all? Mud clinging to the reeds which cling in turn to the cuffs of our pants which are not actually ours: proximity vs. resistance.

Onward Xian soldiers. When I was a child the Baptists stood up when the accompanist pounded the opening chords of "Stand Up, Stand Up for Jesus," but the Methodists remained seated. This was a neater division than class, one we repeated every summer in the orchard between the roots of the damsons.

Asphalt poured over disturbed ground—it appears solid, but it's not.

An admission of doubt, which is not the same thing as an admission of guilt but will suffice in most kitchen recipes. Our own traces, for example: in June dust. In June dusk. At the length of its tether desire comes bounding back. A whistle will do it. The right word, spoke in an even, conversational tone. Though it brings a death. The crust shot through with its leaven.

Boys, dikes, wooden shoes. Vast sibling rivalry. A lisp affected in criminal court. Someone or something has been burning.

Posted by Douglas Messerli at 10:25 AM