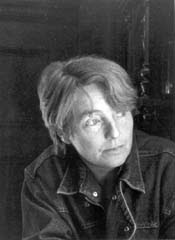 Born in Buffalo, New York in 1940, Fanny Howe grew up in Cambridge and Boston. Her father was a noted lawyer and, later, a teacher at Harvard University. Her mother, Mary Manning, was born in Dublin and wrote plays and acted for the Abbey Theatre before moving to the United States.

Howe is the author of numerous volumes of fiction for adults and younger adults, essays, and poetry. Her first collection of poetry was The Amerindian Coastline Poem in 1976, which was followed by Poem for a Single Palet (1981) and Alsace Lorraine (1982). During the 1980s she continued to publish poems occasionally: For Erato appeared in 1984 and Introduction to the World was published in 1985, followed by The Lives of a Spirit, prose poems, in 1986.

At the same time, Howe published several important works of fiction, including In the Middle of Nowhere, The Deep North, Famous Questions, Saving History, and Nod.

For several years Howe taught at MIT in Cambridge while caring for her three children before becoming Professor of Writing and Literature at the University of California, San Diego. More recently, she has returned to live on Martha’s Vineyard.

Among her most recently works are Selected Poems (2000), which was shortlisted for the Griffin Poetry Prize, Gone (2003), On the Ground (2004) and the collection of literary essays The Wedding Dress: Meditations on Word and Life (2003).

For a review of Howe's book, Emergence, click below:
https://jacket2.org/reviews/fanny-howes-revelation

August announces the mother’s return
as a virgin

Snowy lilies are freckled brown.
Both seed and papers fly.

But there is a weary subzone
and orange in a leaf.

The principle is understood
to be failure at a certain level, dreadful

exhaustion hitting
just when the sun penetrates the green

Posted by Douglas Messerli at 10:28 AM