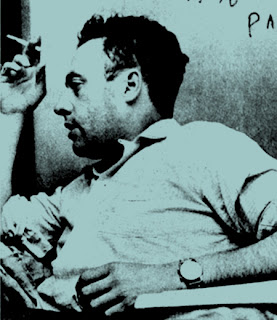 Enrique Lihn was born in Santiago in 1929. Early on, he accepted the tutelage of his uncle, a professor of drawing, who instilled in the young boy a love of art. Lihn was educated at the School of Fine Arts and also attended the German lycée in Santiago. But gradually, the young student realized that his true talents were for poetry. He published his first collection, Nada se escurre (Nothing Slips Away) in 1949, at the age of 20. Poemas de este tiemp y de otro (Poems of This and Another Time) followed in 1955. But it was his 1963 collection, La pieza oscura y otros poems (The Dark Room and Other Poems) that established his reputation. Poesía de paso (Occasional Poems) of 1966 won him the award from La Casa de las Américas from Cuba. He wrote several further collections, as well as short fiction and novels.

As a recepient of a UNESCO fellowship Lihn traveled to the United States and to other Latin American countries, and in 1965 he visted Europe. Lihn particularly fell in love with Paris, and later spent a longer period of time there. His 1974 trip to the United States was extremely successfully, and resulted in several translations.

Suffering from heart problems and cancer, he died in Chile in 1988.

What has become of us now? Were we caught off guard that night, in the woods foreger
with rusty wellwater seeping in our dreams or did we pick up the old familiar path
that evening
and was it a bit late for us in the garden, a bit night near the hothouse
our nostrils, our hands smeared with woods, hands stained with rust from the wellmouth,
the smart in our buring ears, the corpus delicti clapped on our ears:
the bite, the trace of a harmless insect?

Or did we really get lost in the woods? This might be a clearing in the dream:
we're only there the way a bittersweet memory of the children returns
late at night, when everyone at a painful family gathering has tried
and couldn't keep it shut in the playroom upstairs. Because this
talking garden would no doubt tell us something if we were awake.
But between it and us (we've sworn like perjuerers to our real age)
this years rise up, smeared with the air that enters the hothouse thrugh all its
broken panes,
glazing our view of night in the invincible woods.

And there's nobody out there, they'd all say that if we asked loud enought; and
if they heard uas asking; or if they agreed
to take up this absurd questions. Nobody but the scattered reflection of all those
faces
in the unbroken panes, smeared with nobody.

The leaves say nighting that isn't clear in the leaves. Memory
says nothing that is not a memory. Only fever speaks about
what speaks in it with another voice each time. Only fever
is different from the self it talks of.
And there's nobody out there

But what has become of us now?

─Translated from the Spanish by John Felstiner

I could damn everything equally, just don't ask me in the name of what.
In the name of Isaish, the prophet, het with the grotesque and unfinished gesture
of his colleague Jonah
who never managed to go through with his simple task, given to th ups and downs
of good and evil, to the fickle circomstances of history
that plunged him into the uncertainties of a whale's belly.
Like Jonah, the clown of heaven, always obstinate in going through with his simple
task, the explosive briefcase tucked under a sweaty armpit, an umbrella worn down
like a lightning rod.
And Jehovah's doubts about him, wavering between mercy and anger, grabbing him and tossing him, the old instrument whose use is doubtful
no longer used at all any more.

I too will end my days under a tree
but like those old drunken tramps who detest everything equally, don't ask me
anything, all I know is that we'll be destroyed
Blindly I see the hand of a lord whose name I don't remember,
his delicate fingers clenched awkwardly. And also something else that has nothing
to do with it. I remember something like...
no, it's only that. Just a thought, it doesn't matter. I just don't know where I am
going again.
Help me Lord in Thy abandonment.

─Translated from the Spanish by Jonathan Cohen

Cities are images
All you need is a schoolboy's notebook to carry out
the absurd like of poetry
in its first stages:
strangeness raised to Dürer's third power,[1]
and a pain that never gets to be itself,
in a melancholy way.

Two white rats runs in a circle
at the speed of neurosis;
after whirling around for a full sixty days
in the big world as in a cage,
I set my mind on one thought:
rats going in circles.

White, shaggy, little sphere
split in halves that jump to unite,
but where the cut was, the confused softness
and the pain, there are now those little legs,
and between them different sexes,
counterbalanced sexes.
Things come out of us from where we were
completely apart, apart completel.
five minutes of hate, in all...five minutes.

Cities are like getting lost on the same old
street, in that part of the world, never in another.

What is it that wouldn't matter
if it were to be made whole again, in short,
to be pettily identical to what's different?
Sun of the final day; what a great way to end
poetry and its work!

In the big world as in a cage
I tune a dangerous instrument.

─Translated from the Spanish by David Unger


We are the victims of an old aggression
let's stay calm otherwise rage
built up for a long time will turn on us.
Hate for no reason can wear this face
of a pensioner absorbed in chores of gardening
in the shadow of his wife in an empty house.
This person can split in two
and show up elsewhere, at night, in very shady company
near the scene of any crime, and warily attend
a secret wedding of drug dealers.
Let the old sleeping dog lie,
under his mangy and dusty coat he bristles in dreams of massacre
there beneath the stained snow in Transylvania.
Let us store for winter
the best resources of a good upbringing
in spring we'll say that butterflies that trees
and come summer perphas it will be easier
to collect the dividends from a bland behavior,
so then we'll give in to hypnosis easily
and the sunlit sea, under a sky that is in itself salvation
will spawn and rock our fond desires.
To be sheer nothingness or to be the nothing that we are; dust and mere dust
that never will turn into anything
and somehow to live on the absence that constantly
moves toward the future because we are that absence.
Nothing of all this can resist
the sea breeze and the boundless myriad
of seabirds wheeling at the edge of tasseled waves
while the sea folds its mantle over and over on the sand
and that sun, unique each time, lives on the aura of its days, eternal for us
saying its hic and nunc, going sheer white in the burst of the waves.
The horrible old man leaves his torture gear about
and out of reach of the kids (wisely invisible)
near the winding seaside paths of a country house
night, as its name suggests, will bring us rest
maybe unquiet dreams but just as forgetful
too hard to reconstruct in the daylight among the dunes.
Yes, we're given this simple yet secure happiness
the only one that leaves them behind by its own slowness;
unknowingly the furies chase us somewhere else
maybe they stage their act in some nearby resort
a harbor that takes them in with drunken arms
sweat of some masks that soak up dusty salt.
Some stray mouse squeaks at most, for a moment on the roof
in the claws of a sun-loving cat.
Our calm depends on so little
but for that moment so little's more than enough
it's far too much, an overbearing though invisible gesture
and that jold man who only seems godlike but isn't
a table d'hôte Beelzebub, resigns himself to waiting
for passage toward a harsher season that will make his meddlings easier.

The analyst gets ready at his work counch.
The priest, if any, practices absolution
before a cracked mirror that multiplies his face
the guardians of established Order, hoping
that for once this chaos will do us harm.
From the top of any hierachy history's shaky voice
is haranguing away, a full-sized statue
aroused by the greediness its incoherence imposes,
that thick treath is all of the Word
that has survived, ripping it apart with its carnivorous teeth
a century or two gone by for nothing
engulfed in introspection or abstruse words
to let the so-called wheel of fortune turn
meekly as a lamb on the sacrifical stone.
Inside the kingdom one knows it's not of this world
for reasons even beyond his control.
Besides things have always been like this
it's not a matter of skepticism but facts
alongside them words are suprfluous.
We have split into these absurd characters or they
have split into us, it's the same either way.
Actually we should have foreseen it
since they resemble us in some strange way,
we know them inside out.

This is only the balance of a few years of life,
endured from the start in a guilty exile
neither priest nor analyst know anything about the word
it's something deaf, dumb and lind that takes on
without feeling responsible all our faults
ours or others', its the same either way.

The little man appears at the Vatican's balcony
to satisfy the Anglo-Saxon humor
and he gives an absurd lesson on sex.
Doctor, the Id is at the base of things
and as you said, its shady accomplice
works itself out in the windings of empty speech
on the chance of an inspiration based on its own chatter.
While the word suffers from permanent aphasia
the same beast as fifty thousand years ago
all its shapes lost along the way.
A could stuffed down under the soil to rot,
some toad or stone would go about it better
since for sure its activity is frenzied
deaf, dumb and blind neither on or off course
and the idea of the absurd still just an idea
says nothing of what we can or cannot imagine
conforming to our merely human habits.
This vague aggressiveness, that strikes us suddenly
at the end of any day, at the turn of the seasons
and even in the face of the sea breeze
a clear call to the simplest of pleasures
and even for the most unbridled sort of pleasure
this need as urgent as obscure to break
the balance of the garden, with a coarse word
first of all it's a fact not a cause or effect
a hubbub that can die down in favorable situations
and against which precautions or the situations aren't enough
whether we store it or not, in itself, it's uncalled-for
an attribute which is the same as scandal
hate for no reason or love for no reason
absorbed or not in its lack of presence
not nostalgic either, simply a fact
resistant to comparisons that pacify it
old sleeping dog or part-time gardener
it is and isn't for now our only truth.

─Translated from the Spanish by Jonathan Cohen, John Felstiner,
and David Unger