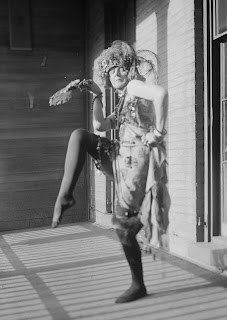 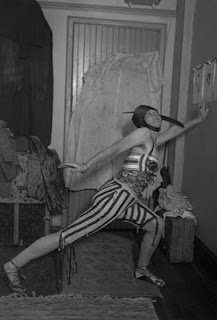 Else Hildegard Ploetz was born in Swinemunde on the Baltic Sea in Pommerania (now in Poland, but then a part of Germany), the daughter of Adolf Julius Wilhelm and Ida-Marie Ploetz. Else grew up close to her mother, and when her mother died of uterine cancer, she blamed her father, convinced that the disease was caused by untreated syphilis with which he had infected her.

Her father remarried soon after Ida-Marie’s death, and Else, detesting her stepmother, ran away from home to Berlin. In that city she participated in the circle of poets around Stefan George and had a three-year affair with the popular Bohemian artist, Melchior Lechter. She also had a passionate relationship with Ernst Hardt, which she broke off when she discovered that he intended to Mary a Greek diplomat’s daughter. Joining the “Living Marble Figures” revue of H. de Vries—a group of performers engaged in presenting tableau vivant—she toured several cities. When her relationship with Hardt ended, Else traveled from two years through Italy with the artist Richard Schmitz, with whom she described her relationship as platonic.

Upon her father’s death, she inherited a small stipend which allowed her to settle in Dachau, near Munich, where she took art lessons. There she met the famed architect August Endell, who she married in April 1901. Soon after, the couple moved to Berlin where Endell designed the famed cabaret theater, the Überbrettl.

Two years after their marriage, Else left Endell, beginning an affair with his friend Felix Paul Greve. The three embarked from Hamburg on a trip to Italy, but Greve and Else abandoned Endell in Naples, traveling on to Sicily.

Later that year Greve was imprisioned for embezzlement. Greve, who had previously translated several writers into German, including Oscar Wilde, André Gide and H. G. Wells, worked further in translation and his own fiction. While Greve was in prison, Else began writing poetry, and when Greve was released, the couple spent some months in Switzerland, where Greve translated and finished his first novel, Fanny Essler, a thinly veiled account of Else’s Bohemian days in Berlin.

From Wollerau Greve and Else moved to Paris-Plage on the French Channel Coast, and by 1906 had returned to Berlin. In July 1909, Greve staged his suicide, in which Else played a dramatic role, disappearing from Germany. He sailed from Liverpool to Montreal, renaming himself Frederick Phillip Grove.

A year after Greve’s disappearance, von Freytag-Loringhoven followed him to Pittsburgh, Pennsylvania, where he had temporarily relocated. From there they moved to a small farm in Sparta, Kentucky. Greve, however, soon left her, disgusted with her open sexuality, and Else was left alone in rural Kentucky with a limited knowledge of English. Soon after, she moved to Cincinnati, where she modeled for artists.

Among the artists she is known to have posed for were George Biddle and Charles Sheeler. Hart Crane is reported to have claimed that the Akron photograph Herbert Minns also used her as a model. It is unclear when she made her way to New York, but by 1913 she had met and married Baron Leon von Freytag-Loringhoven in that city. It is through that marriage that Else came to be known as the Baroness, but little else is recorded of their relationship. Editor Margaret Anderson describes their marriage as a brief one, since the Baron returned to Germany with the outbreak of war and there, because of his dislike of war, shot himself.

Else resumed modeling and, soon after, met several influential artists, including Sarah Friedman-McPherson and Man Ray. She also published numerous of her Dada-like poems in journals such as The Little Review, Broom, The Liberator, and Transition. In The Little Review her poetry outraged some readers, and novelist Evelyn Scott proclaimed Else to be mad.

During this period she created “ready made” sculptures and collages from random items she found in the trash, the most famous of which was a plumbing pipe she called “God” (1917). For many years the work was attributed to Morton Schamberg, who probably was responsible only for the object’s photograph.

Else had become a Greenwich Village legend by the 1920s, where she was arrested several times for wearing revealing costumes and for stealing objects that caught her eye. She offered to give her friend William Carlos Williams syphilis because it would “free his mind for serious art.” She twice accosted Williams after that statement, and the second time he had her arrested.

Man Ray and Marcel Duchamp made a short film of her: “The Baroness Shaves Her Public Hair.” Indeed Else was obsessively in love with Duchamp, and he was the subject of several of her poems of this period, in particular “Love—Chemical Relationship. She also made at least two portraits of Duchamp, the second, completed in 1920, being a “ready made” of feathers and other items topped with a wine class.

After the war, Else was unable to finance her desired return to Europe. But through the help of William Carlos Williams and other friends of her Dada circle, she was able to return. With conditions as they were in Germany, she was reduced to selling newspapers on a street corner during the winter of 1923 and 1924. Several times she was sent to mental asylums as a result of her blackmail attempts against André Gide, George Bernard Shaw and others. She also shocked society by appearing at Embassy parties in outrageous costumes of her own making. As she wrote her friend Djuna Barnes: [errors in spelling have not been corrected] “I went to the consulate with a large-wide sugarcoated birthday cake upon my head with fifty flaming candles lit—I felt just so spunky and afluent! In my ear I wore sugar plumes or matchboxes—I forget wich. Also I had put on several stamps as beauty spots on my emerald-painted cheeks and my eyelashes were made of gilded porcupine quills—rustling coquettishly—at the consul—with several ropes of dried figs dangling around my neck to give him a suck once and again—to entrance him. …I guess the inconsistency in my costume is to blame for my failure to please the officials?”

Inheriting a small sum of money once again, von Freytag-Loringhoven traveled to Paris in 1926, where her room rent was paid by Djuna Barnes. She returned to modeling and writing, but her lack of knowledge of the French language and the paucity of publishing options for her English-language poetry, kept her in poverty. On December 14th, 1927, von Freytag-Loringhoven died of asphyxiation due to a gas jet left on overnight. Some acquaintances presumed her death was suicide, but friends such as Barnes and Peggy Guggeheim believe it was, as Barnes put it “a stupid joke.” Most of her papers and poems fell into the possession of Barnes after her death.

Although she wrote in both German and English, von Freytag-Loringhoven’s English-language poetry was primarily published in American literary journals, and can be best understood within the context of USA poetry of the late teens and 1920s.

Do you know that made
from rich pure shaving
cram Jim Henry tired
out! —

Famous fain reduces
reg’lar fellows to the
toughest korry-krome
pancake apparel—kept
antiseptic with gold dust
Rapid transit — —
It has raised 3 generations
of mince-piston-rings-pie.
Posted by Douglas Messerli at 8:28 AM