Born of Finland-Swedish parents, Edith Södergran was educated at a German school in St. Petersburg. Moreover, she contracted tuberculosis early in her life, and was a patient in the sanatorium at Davos, Switzerland in 1912-13 and again in 1913-14. Accordingly, her early work is reminiscent of the German romantics, particularly of Heine, rather than being influence by her native language.

In the beginning of World War I, she settled with her mother at Raivola on the Karelian Isthmus of Finland, an area in which most of the natives spoke Finnish. Extremely isolated, Södergran expanded her girlhood fantasies of taking the Finnish literary world by storm, and made two trips to Helsinki to show her manuscripts. There she met Hugo Bergroth, who persuaded her to abandon the German language for Swedish. Yet Södergran was little influenced by contemporary Swedish writing, but rather looked back to C. J. L. Almqvist of the late 18th and early 19th century, whose romantic heroine in Drottningens juvelsmycke was androgynous. 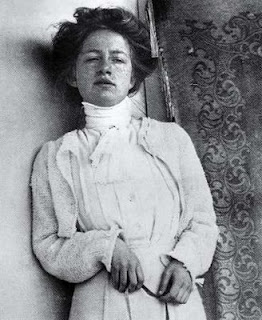 It is presumed that an unsuccessful love affair was the inspiration of her first book, Dikter, of 1916. The reaction to this book was one of open ridicule or perplexity at best. A final attempt to enter the Finland-Swedish literary circles ended in disaster, and Södergran fled back to Raivola.

The October revolution took away the family savings in Russia, and they were left with poverty and illness. A period of severe depression followed, and it was only after reading Nietzsche and after the major events of the Finnish civil war that Södergran was awakened to a new sense of possibility, expressed in Septemberlyran (The September Lyre) of 1918. That book, however, only brought severe doubts about her sanity. One positive review by the critic and novelist Hagar Olsson led to a close and sustained friendship between the two women and to the composition of Rosenaltaret (The Rose Altar) of 1919, which advocated a cult of female beauty and an erotic "sisterhood."

Her conversion, brought about by the writings of Rudolf Steiner and a vision of primitive Christian ritual, led Södergran to abandon poetry after 1920 until the very end of her life. By the 1930s Södergran's work had become broadly admired, and her home in Raivola became a shrine to aspiring lyricists. Among her many admirers were the Swedish poet Gunnar Ekelöf (see PIP Anthology, volume 1) and the Finnish poet Uuno Kailas (1901-1933).

Violet twilights I carry within me from my ancient past,

only sunbeams pay proper homage to a tender female body...

No man has yet arrived, has ever been, will ever be...

A man is a false mirror that the sun's daughter hurls against the cliffs in rage,

a man is a lie, incomprehensible to pure children,

a man is a rotten fruit rejected by proud lips.

Beautiful sisters, come high up to the strongest rocks,

we are all fighting women, heroines, horsewomen,

we are the least expected and the darkest red,

I am a child, a page-boy, and a bold decision,

I am a laughing streak of a scarlet sun...

I am a net for all voracious fish,

I am a toast to every woman's honor,

I am a step toward luck and toward ruin,

I am a leap in freedom and the self...

I am the whisper of desire in a man's ear,

I am the soul's shivering, the flesh's longing and denial,

I am a flame, searching and brave,

I am water, deep yet bold only to the knees,

I am fire and water, honestly combined, on free terms...

Oh the magnificence of hell!

In hell no one speaks of death.

Hell is walled up in the bowels of the earth

and adorned with glowing flowers...

In hell no one says an empty word...

In hell no one speaks but everyone screams,

there, tears are not tears and all grief is powerless.

In hell no one falls ill and no one tires.

Hell is constant and eternal.

Marches of the Future

Tear down all triumphal arches─

the arches are too low.

Make room for our fantastic marches!

The future is heavy─build the bridges

Giants, carry rocks from the ends of the world!

Demons, pour oil under the cauldrons!

Monster, gauge the measures with your tail!

Rise up in the heavens, heroic figures,

We shall grapple and fight.

We shall struggle for the future's manna.

even now strangely visible from afar,

the day demands your drumbeat.

"Violet Twilights," "Vierge Moderne," "Hell," and "Marches of the Future"

Posted by Douglas Messerli at 1:05 AM