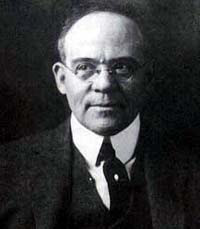 Born in Garnett, Kansas, Edgar Lee Masters was the son of a lawyer. Although the father had moved the family to Kansas in order to establish his law practice, most of Masters’ life was spent in the western Illinois farmlands where his ancestors had originally settled. He attended public schools in Petersburg and Lewiston, and spent a year in an academy in an attempt to gain admission to Knox College.

Rather than attending college, however, Masters studied law with his father, ultimately forming a partnership in 1893 with Kirckham Scanlan. Over the next few years Masters wrote essays and plays under the pseudonym of Dexter Wallace. In 1898 he married the daughter of a Chicago lawyer, Helen M. Jenkins, a marriage which produced three children.

In 1903 he joined the law firm of Clarence Darrow, in which he defended mostly poor clients over the next eight years. Meanwhile, he continued to write undistinguished plays and poetry. Extramarital affairs and an argument with Darrow led to his leaving Darrow’s firm and to the establishment of his own practice.

In 1914 Masters began a series of poems about his boyhood memories in Western Illinois, published under the pseudonym of Webster Ford. These works became the core of Spoon River Anthology, which he published the following year. The book became a bestseller, establishing its author as a serious poet of the people. Abandoning his law practice in the 1920s in order to write, he moved the New York City. But his 1923 divorce from his wife put him into financial difficulties. His 1926 marriage to Ellen Coyne only continued Masters’ marital strife, and although the rest of his life was productive, he never reached the quality and fame of his first poetic achievement.

Out of me unworthy and unknown
The vibrations of deathless music;
“With malice toward none, with charity for all.”
Out of me the forgiveness of millions toward millions,
And the beneficent face of a nation
Shining with justice and truth.
I am Anne Rutledge who sleep beneath these weeds,
Beloved in life of Abraham Lincoln,
Wedded to him, not through union,
But through separation.
Bloom forever, O Republic!
From the dust of my bosom!

Dust of my dust,
And dust with my dust,
O, child who died as you entered the world,
Dead with my death!
Not knowing Breath, though you tried so hard,
With a heart that beat when you lived with me,
And stopped when you left me for Life.
It is well, my child. For you never traveled
The long, long way that begins with school days,
When little fingers blur under the tears
That fall on the crooked letters.
And the earliest wound, when a little mate
Leaves you alone for another;
And sickness, and the Face of Fear by the bed;
The death of a father or mother;
Or shame for them, or poverty;
The maiden sorrow of school days ended;
And eyeless Nature that makes you drink
from the cup of Love, though you know it’s poisoned;
To whom would your flower-face have been lifted?
Botanist, weakling? Cry of what blood to yours?—
Pure of foul, for it makes no matter,
It’s blood that calls to our blood.
And then your children—oh, what might they be?
And what your sorrow? Child! Child!
Death is better than Life!

Posted by Douglas Messerli at 12:08 PM