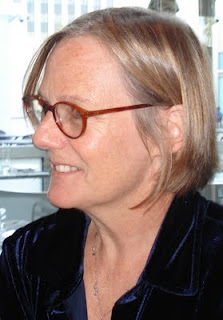 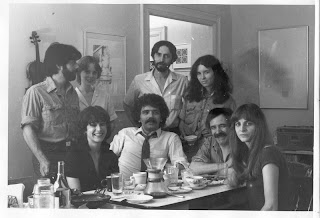 Born in Washington, D.C. in 1956, Diane Ward grew up in the Virginia suburbs of that city. She was one of six children, one of whom died in infancy, and in order support his family, her father worked as an accountant for the General Accounting Office of the U.S. government during the day, and in numerous other jobs in the evenings. He died when Ward was 12. Finances became difficult for the family, and Ward’s two brothers dropped out of school. Her mother worked as a seamstress and for a savings and loan institution.

Ward was determined, however, to become an artist, and enrolled in the Corcoran School of Art, which was then an unaccredited institution. There she began taking art courses and also met Doug Lang and Terence Winch, both of whom taught creative writing. Ward began writing poetry, and with Doug Lang moved into a large house whose other tenants included local poet Bernard Welt. At this time, Lang began a reading series at a local bookstore, Folio, whose guests included John Ashbery, Charles Bernstein, and many others. The series influenced several local poets, including Douglas Messerli, Joan Retallack, Lynne Dreyer and Phyllis Rosenzweig, a curator at the Hirschhorn Museum of Art and Sculpture. But Ward notes that she truly realized that she wanted to become a poet only when, one day, she heard a local Radio Pacifica broadcast in which Peter Inman described what he felt a poet was. By the age of 18, Ward won a National Endowment for the Arts grant for poetry.

Although influenced, in part, by writers associated at the time with New York School poetry such as Bernadette Mayer and Clark Coolidge, Ward notes that she was most influenced by Gertrude Stein and conceptual artist of the period. “I realized that poetry could be like drawing, it could be thinking itself, a conceptual activity, and not just an end product.”

The loss of the communal house and the closing of the Folio bookshop brought an end to this important D.C. group; and, ultimately, Ward moved with a young artist friend to New York City in 1979. There she worked as a freelance typesetter, and helped with distribution and production for Roof Books, one of the major sources of “Language” poetry, edited by James Sherry. While working on the night shift at a typesetting house near Union Square, she met Chris Hauty, the man she would later marry. Hauty also wanted to be a poet, but writing plays and reviewing scripts, he begin to focus more heavily on film, and turned to writing film scripts.

Meanwhile, Ward took a job as a production associate at Pantheon books in 1982. In 1987 she moved with Hauty to Los Angeles, where they had two children, George and Jackson. Hauty began working for various film studios, and Ward worked for a while at the Univrsity of California Los angeles, before turning her attention full time to motherhood. She now works as a schoolteacher’s assistant.

Through all these years she still found time to devote herself to poetry, writing nine books of poetry and editing, with Phyllis Rosenzweig, a journal published in various forms—fliers, postcards, etc. She has also extensively participated in readings throughout the country. She lives in Santa Monica, California.

scared it will clutch green
be unreachable across flow
violent as Columbus
we can’t do anything, it feels
awe between storm-dressed death
compares life to
man, an X-shaped resistance
but nothing was done
for man an X-shaped
nonmilitary face
as if the end is composed of brick-like desire
worst suspicions
do you name it as you see it
now
or as you witnessed it
here
humane and raw as in a fine-looking founding
including circulating rumors
holder of the heel
unrequited wall across the sea
would be grateful if any of our friends
our collective aerial capacity
as we drive and conduct ourselves
to be a strong champ of digit theory
to be concerned about behavior’s
opponent begins with wood, the wide element
deforested, as much dollars a day
as a month of Sundays
people out there who do not wish us
indeterminate intention of heaven’s outstretched hand
birth month, when a rocket was fired
coiled mass of bar codes spell out ‘emperor’
hunters, hoping their darling
defeats unbound dread
most dangerous is out of place
succor annihilated so he prowls
ask what I am doing, who am I
hides humanity
five children, but I can’t make Saint
that first bloom of love
haunted by day-to-day extreme
point weapons at residents
defend the pearly turnstile
urgent issue behaviors will allow
the darling to defeat unbound dread
and our children in our streets
as they ran alongside the convoys
oh, prosperous spear
I’m worried we will be hit
awe between rehearsed death
get into our homes
our businesses’ succor annihilated, we prowl in place
fed up with the barriers
indeterminate intention of heaven’s outstretched hand
reason to maintain strong
displacer
instead, a street in the middle
encircled by glory
talks into its radios and peers
struggle-like
we seemed lethal in our quaking
our supreme subsistence
immaculate, simple
choices we too might make
many child soldiers act manly
both prevail in a harsh world
Like him: penniless, defenseless
A darling who defeats the unbound dread
Of weary acceptance, “what can I
indeterminate intention of heaven’s outstretched hand
Use a bag printed with cartoon figures
Grown in the same way, the same root as man
“victory people” left us history
we both prevail in a harsh world
the least seven people living on the
strong stumps of digit theory
vagrants and beggars too late
for the Prosperous spear
“victory people” left only the vaguest concrete history
Grown in the same way, the same root as man
Shock and sorrow with the arrest
can we hide a human
cut deep across class
during the day but deserted at night
unreachable across flow
violent as Columbus
jaded by reports of violent crime
meaning carried by the wind
demanded answers
ability to succor annihilated, we prowl out of place
have never been seen before
the same way, the same root as man
a symbol of both
There does not appear to be any
“Darling” who defeats unbound dread
though “social cleansing”—perhaps
Haunted by day-to-day extreme
Child, love the Group that provides protection
Displacer
“victory people” left only a hazy
silence, indeterminate intention
of heaven’s outstretched
literary hands: who makes choices
to continue an X-shaped resistance
on sidewalks where so many
remain in the streets
darlings who defeat unbound dread
our name veers to cut across classes
world oh might!: a familiar archetype across the years
no plans to unclaw the green
to thwart the violent flow
down on a hard luck
unforgiven
as Columbus
“If you die, you die,” says Displacer
encircled by glory
struggle-like
between death
Displacer, defend the pearly turnstile
Its wily objects
of consumed confidence
will end up in a pile
of desire
delivery devices