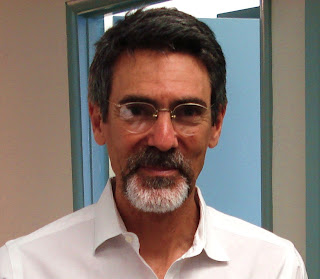 The fact that Dennis Phillips was born and raised in Los Angeles is quite apparent through his poetic writing, for he captures the sense of discontinuity that is so unique to this city’s character and—some might say—its excitement. While growing up with the ever-present awareness of Hollywood and the increasing deluge of media influence, Phillips grained a criticality of these forces through his poetic practice and, for a decade in the 1970s, his interest in experimental film. He attended the famed California Institute of Art, receiving a B.F.A. in 1973. He then went to New York University in the graduate Classics department before leaving to make an experimental documentary, Possibilities of Activity, with cinematographer Anthony Forma.

In the late 1970s, Phillips joined the core faculty of the Liberal Arts and Science Department of the Art Center College of Design in Pasadena, where he continues to teach today.

Phillips had begun writing poetry at the age of 14, publishing poems in the Chicago Review and elsewhere. His first book publication was The Hero Is Nothing in 1985. During this same period, he served as the Book Review Editor for Clayton Eshelman’s noted Sulfur magazine. From 1985 to 1988 he was director of the Beyond Baroque Foundation in Venice, California.

Throughout the late 1980s and 1990s he published eight books of poetry. Most recently, his works have included Study for the Ideal City, published by Seeing Eye Books in 1999, and Sand in 2002.

With Martha Ronk and Paul Vangelisti, Phillips served as the editor of Littoral Books, which published several books in the 1990s and into the turn of the century. He is currently a poetry editor for The New Review of Literature, and teaches courses at Occidental college and in the Graduate Writing Program at Otis College of Art and Design.

Phillips’ work is high engaged in narrative—he also writes fiction—but in the poetry he often deletes narrative connections, which forces the reader to piece the narrative together, using the linguistic connections that make up his lyrical and imagistically evocative writing. The work, indeed, reveals his love of music and the influence of the great Modernist figures such as Joyce, Pound and Stevens. In 2007 Phillips published his first fiction, Hope (Green Integer).

He lives, with his artist wife, Courtney Gregg, and their daughter Sophia in Pasadena.

Philllips's book Sand may be purchased through this link: http://www.greeninteger.com/book.cfm?-Dennis-Phillips-Sand-&BookID=76

Can a book read a book?
Then why do they tell me I’m beautiful?
And what are these clouds that mask my eyes
and this strange thing they call air and insist on?

I tell you often that I like to hurt myself.
I mean what I say but it’s not what you think.
I mean that I too insist on air now,
more and more as my eyes see clouds I once passed through.

What are those noises above us?

Does food drop straight to your feet?
I thought I told you this before.

There are night birds in my house
and the old woman begs me for a kiss.

There were squirrel-birds and jackal-birds
and the old woman wore a vermilion jacket.

She sits on the edge of a resting ladder.
Her arms rehearse a dance but she can’t stand.

If you clap your hands the birds will go away.
Or at night the cold air slows them to be gathered.

I try to make the old woman stay
but she’s looking somewhere else.

I hit my pillow. I throw my hundred creatures.
You ask me why I can’t sleep alone.

What has changed in their voices?
Don’t be afraid to answer.
Just because I once fed on air
doesn’t mean I’m fragile.
I’m not like the beards of Spanish Moss
hanging from trees by the ocean.

There was an animal but it was clothes.
That’s what the dark is like.
The air and the dark are not the same.

Is this a dream?
Is that what happened?

It’s still dark but is it morning?
Does that make it the day?
A day can be where letters and numbers
are carried by the same breeze.

I can hear clouds passing.
There are sparks and sweeps of light outside.
Inside the darkness looks like gray flannel, but moving.
Then I see pink on the curtains.

What is it that they expect of me?
Why do we need to sleep?
When can I know what it is they do
who drive at night?

I’m not tired. I sit on the porch
and watch the world pass by.
The world is cars, birds, helicopters
and someone who brings letters.

Palm fronds play in the wind
but what are fronds?
Crickets pulse and the night is hot.
Will this be my memory of summer?

There’s a vacancy I feel
but they can’t tell me why.
And only crickets come.

I wonder about the wind.
It whistles or the house does.
Something looms in the voices they speak with,
something unknowable that will never be enough.