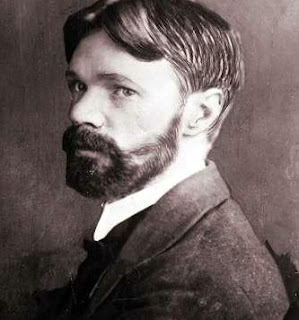 Born in 1885 in Eastwood, Nottinghamshire, England, D. H. Lawrence spent a life of controversy, in part because of his unconventional sexual views, but also because of the political and social attitudes of many works of his fiction and books of poetry.

He began writing at the age of nineteen, and being admitted through a scholarship to the University of Nottingham, he composed several notebooks which established his poetics. From 1908 to 1912 he taught in London, publishing his first novel, The White Peacock (1911), followed the next year by The Trespasser. That same year he met the German-born aristocratic Frieda Weekley, with whom he eloped to Germany, leaving behind her husband and three small children. Two years later, upon her divorce, they were married in Italy. They returned to England for World War I.

While in Italy, Lawrence finished Sons and Lovers, which he published in 1913. The same year his first collection of poetry appeared, Love Poems and Others. In 1915 he published the novel The Rainbow, followed by two further collections of poetry, Amores (1916) and Look! We Have Come Through! (1917). His increasing ill-health forced him to travel the war to various places, including Sicily, Ceylon, Australia, the United States and Mexico.

He finished one of his major works of fiction, Women in Love, in 1920, and over the next few years, in Mexico and New Mexico in the United States, worked on several important novels, including Aaron’s Rod (1922) and Kangaroo (1923). In these books Lawrence promoted his anti-democratic viewpoints, which later lead to his being seen as a sympathizer with fascist viewpoints. But, in point of fact, Lawrence changed his political and social views radically during these years, later denouncing his call for a “natural aristocracy.” During these same years, he published several new collections of poetry, namely Tortoises (1921) and Birds, Beasts, and Flowers (1923). His Collected Poems appeared in 1929.

Lawrence spent his last five years near Florence and in southern France, where he died of tuberculosis in 1930. His most controversial novel, Lady Chatterley’s Lover, was privately printed in 1928.

In Syracuse, rock left bare by the viciousness of Greek women,
No doubt you have forgotten the pomegranate trees in flower,
Oh so red, and such a lot of them.

Whereas at Venice
Abhorrent, green, slippery city
Whose Doges were old, and had ancient eyes,
In the dense foliage of the inner garden
Pomegranates like bright green stone,
And barbed, barbed with a crown.
Oh, crown of spiked green metal
Actually growing!

Now, in Tuscany,
Pomegranates to warm your hands at:
And crowns, kingly, generous, tilting crowns
Over the left eyebrow.

And, if you dare, the fissure!

Do you mean to tell me you see no fissure?
Do you prefer to look on the plain side?

For all that, the setting suns are open.
The end cracks open with the beginning:
Rosy, tender, glittering within the fissure.

Do you mean to tell me there should be no fissure?
No glittering, compact drops of dawn?
Do you mean it is wrong, the gold-filmed skin,
integument, shown ruptured?

For my part, I prefer my heart to be broken.
It is so lovely, dawn-kaleidoscopic within the crack.

Rock, waves of dark heat;
Waves of dark heat, rock, sway upwards
Waver perpendicular.
What is the horizontal rolling of water
Compared to the flood of black heat that rolls upward past my eyes?

A snake came to my water-trough
On a hot, hot day, and I in pyjamas for the heat,
To drink there.

In the deep, strange-scented shade of the great dark carob tree
I came down the stops with my pitcher
And must wait, must stand and wait, for there he was at the
trough before me.

He reached down from a fissure in the earth-wall in the gloom
And trailed his yellow-brown slackness soft-bellied
down, over the edge of the stone trough
And rested his throat upon the stone bottom,
And where the water had dripped from the tap, in a small clearness,
He sipped with his straight mouth,
Softy drank through his straight bums, into his slack long body,
Silently.

Someone was before me at my water-trough,
And I, like a second-comer, waiting.

He lifted his head from his drinking, as cattle do,
And looked at me vaguely, as drinking cattle do,
And flickered his two-forked tongue from his lips, and
mused a moment,
And stopped and drank a little more
Being earth-brown, earth-golden from the burning
bowels of the earth
On the day of Sicilian July, with Etna smoking.

The voice of my education said to me
He must be killed
For in Sicily the black black snakes are innocent, the gold
gold are venomous.

And voices in me said, If you were a man
You would take a stick and break him now, and finish he off.

But must I confess how I like him,
How glad I was he had come like a guest in quiet, to drink
at my water-trough
And depart peaceful, pacified, and thankless
Into the burning bowels of this earth?

Was it cowardice, that I dared not kill him?
Was it perversity, that I longed to talk to him?
Was it humility, to feel so honoured?
I felt so honoured.

And yet those voices:
If you were not afraid, you would kill him!

And truly I was afraid, I was most afraid,
But even son, honoured still more
That he should seek my hospitality
From our the dark door of the secret earth.

He drank enough
And lifted his head, dreamily, as one who has drunken
And flickered his tongue like a forked night on the air,
so black,
Seeing to lick his lips,
And looked around like a god, unseeing, into the air,
And slowly turned his head,
And slowly, very slowly, as if thrice adream
Proceeded to draw his slow length curving round
And climb again the broken back of my wall-face.

And as he put his head into that dreadful hole,
And as he slowly drew up, snake-easing his shoulders,
and entered further,
A sort of horror, a sort of protest against his with-
drawing into that horrid black hole,
Deliberately going into the blackness, and slowly
drawing himself after,
Overcame me now his back was turned.

I looked round, I put down my pitcher,
I picked up a clumsy log
And threw it at the water-trough with a clatter.

I think it did not hit him;
But suddenly that part of him that was left behind
convulsed in a undignified haste,
Writhed like lightning, and was gone
Into the black hole, the earth-lipped fissure in the wall-front
At which, in the intense still noon, I stared with fascination.

And immediately I regretted it.
I thought how paltry, how vulgar, what a mean act!
I despised myself and the voices of my accursed
human education.

And I thought of the albatross,
And I wished he would come back, my snake.

For he seemed to me again like a king,
Like a king in exile, uncrowned in the underworld,
Now due to be crowned again.

And so, I missed my chance with one of the lords
Of life.
And I have something to expiate:
A pettiness.

Death Is Not Evil, Evil Is Mechanical

Only the human being, absolved from kissing and strife
goes on and one and on, without wandering
fixed upon the hub of the ego
going, yet never wandering, fixed, yet in motion,
the kind of hell that is real, grey and awful
sinless and stainless going round and round
the kind of hell grey Dante never saw
but of which he had a bit inside him.

And thou shalt begin to spin round on the hub of the obscene ego
a grey void thing that goes without wandering
a machine that in itself is nothing
a centre of the evil-world.

Posted by Douglas Messerli at 11:11 AM