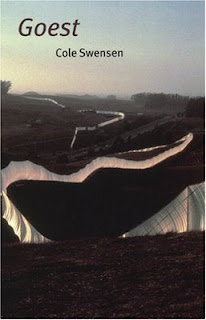 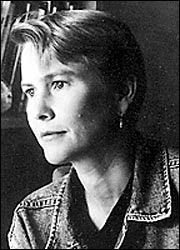 Born and raised near San Francisco, California, Cole Swensen got a B.A. in English and an M.A. in creative writing from San Francisco State University and a Ph.D. in Literature from the University of California at Santa Cruz. She worked a variety of jobs including bartending, waitressing, gardening, translating, and teaching with California Poets in the Schools and at community colleges until she took a position at the University of Denver, where she taught literature and directed the creative writing program from 1997-2001. She left Denver for a position at the Iowa Writers’ Workshop in 2002, and then became a professor at Brown University. She currently divides her time between Providence, Washington D.C., and Paris.

Her first book, It’s Alive She Says, was published in 1984 and her second, New Math, won the National Poetry Series in 1987. Other volumes have won the Iowa Poetry Prize, the San Francisco State Poetry Center Book Award, and Sun & Moon’s New American Writing Award, and her ninth book, Goest, was a finalist for the 2004 National Book Award; she has also won two Pushcart Prizes and various grants and fellowships.

In 1987, she began spending part of each year in Paris, where she has participated in translation seminars and group translation projects. Her translation of Jean Frémon’s Island of the Dead (Green Integer, 2004) won the PEN Award for Literary Translation for that year, and her translations of Olivier Cadiot, Pierre Alferi, Pascalle Monnier and others have been published by Green Integer, Burning Deck, Black Square, and Roof. She is the founder and editor of La Presse, a small press affiliated with Fence Books that publishes contemporary French poetry in English translation.

Swensen’s work is often ekphrastic, engaging the visual arts in particular, and often uses grammatical innovation to arrive at the unparaphrasable.

Noon can be purchased here.

Dozens of worlds, the weight that she

with arms overloaded, see we can fly I made
you a promise a marble lift out past the fields
where the numbers shift

restless their breaths standing out one to each other

The coming of what outlined against a background we

innumerable sign faltered their singing which
will wake you unready

a rhythm that walker continues inside

Could. sits it practically hums

Too much the name and with it the snap of rope

Swallows plowing through the sky as it descends

"A gust could have

had only known" One start

And one laughs, the time of day head thrown back
and all the leaves singularly moved.

Circus performer falls 35 feet to her death; read more
performed. She performed
She performed on long scarves
without a net. This is hundreds of children. Why are we worried? What was she
parents were watching. Who
are we hurried? in horror
it happened
We were at the circus and it happened.
Statement: 32
years old. Hundreds
of children
while a statement
from hundreds
working without a net
died seven hours after
Hundreds, twirling from a scarf
when something went

Grey now and the shift
is bare
where winter or--
and tal, no
stare out the window
like there was something there
oh flesh of mine
oh small sun of blood
and mid-air

Blind sun
of one
times one
once done

One after one
what paces
within
destroys all sound
and the glass
on the surface of the lake,
the scratch and the
listenings skin

But when you awake
Tere was a world that woke
What did you want
that slid
into position and clicked:
permanent emulsion
the landscape fixed
into anoter face:
Move that lipe: it
says it can't see
but sign me up; hold me tight,
all by itself it breathes.

There are nine grey trees
against the darker green forest
and the surface of the lake
draped. (Break and the image shatters;
speak and the water speaks.) There's
an empty room here,
a litle smile that seals itself to sleep.

The trace stayed
on your hands, carved
there a deeper space
There the skin can't reach
thee after thee
and a calm walk around the edge
where the single breath waits
and something slips off.
They say the shadow separates,
moves on, while the sound
of the body going pale
grounds, which turns
the ground to sonte.

The nine grey trees compose a single move.
Walking unravels the muscle that connects
the earth to bone,
feather it out like a braid unskeined,
the leaves never fallstraight down, even
when you think not one bit of air is moving.
You can hear it too, but the seeing
is more convincing.

And now divide by one. What
day draws deeply from the body now
the empty thing there on the shore
just where the shore joins the sky.

The surface of the water,
alter then and every facet
turns to weather one by
one within the cell a separate
history spinning with a new ring growing
a circular thirs. Count
and the mind is counting; shout
and no voice comes back.


Posted by Douglas Messerli at 7:23 AM