Born in The Hague in 1933, Cees Nooteboom was educated in monastery schools in the southern part of The Netherlands. He now lives in Amsterdam, but spends much of the year in Spain and in travel, recently in Australia and Japan.

Although perhaps better known as a novelist and travel writer, poetry is at the core of Nooteboom's oeuvre. His first book, De doden zoeken een huis (1956), contains many of the themes he was to explore throughout his prolific career, including issues relating to time and death. Over the years—despite a pause in his poetic writing from 1964 to 1978—his poetry has grown stronger and more complex. The publication of his collected poetry, Vuurtijd, ijstijd: Gedichten, 1955-1983 in 1984, revealed a poet of intensely sober observation. His first English language collection, The Captain of the Butterflies, was published by Sun & Moon Press in 1997. 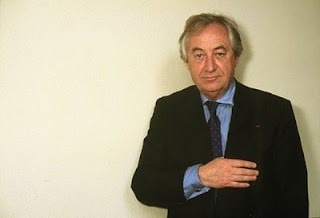 Nooteboom is recognized throughout the world for his many novels, including Philip en de anderen (1955), Rituelen (1980, Rituals, 1983)—for which he won the Mobil Oil Pegasus Prize—In Nederland (1984, In the Dutch Mountains, 1987)—which was awarded the Multatuli Prize—and, more recently, Het Volgende Verhaal (1991, The Following Story, 1994). Among his travel writings are Een avond in Isfahan (1978; An Evening in Isfahan) and Berlijnse notities (1990, Notes of Berlin), and, more recently, Roads to Santiago, published in English in 2000.

Hole in the dark

they named the light of moon

and with their hands disfigured by it

they wanted its measure

and became a new movement

an army of rags and veiled faces

hidden in crowns and coats

on horses of human flesh.

They did not bear names

other than their own

some years they are invisible

there'll be no end to this procession

I see them, see them

Not for someone else

When the high-rise is gone, when this is a plain,

and you a statue, self-raised,

and I touch you,

nailed down with sorrow, when to know nothing

around you, and around me,

I made a disaster out of the ordinary.

I'll forget everything about you, except you.

You rage through the space I occupy,

your live is fate.

Through your likeness I see the longing

from which we were expelled. I had offered everything,

I did not see it.

Death is a male disease.

You go around and gather up life

that we were searching for something,

a summa of what we did not know,

to assume or measure or tally

between all things obscure?

You know, don't you know

how we always wandered off, dividing

the concept and the quest,

Augustine the brothels, Albert the numbers,

always tallying and measuring between words and notes, thinking

among nuns, soldiers and poets,

till the bones, the shadow,

a glimmer, a narrowing down

in senses or images,

until in a glass or a number

but always so briefly

a hiccup of a thought, of a way,

Only the bird sees what I see,

the impassable ways in my hand,

a golden and ash-colored beauty,

of a world drawn only once,

a though construed of matter,

a painting missing its painter,

of their names from always younger mouths.

My making hand follows their forms,

the hidden lines of strata and ore,

diary of desert, of wilderness, of mirroring sea,

that which I am.

my past exists in locked-up images,

called out by fire and water,

a registry of resin and sand.

That is how I show myself,

how I hide myself

in ciphers of height and depth,

on an atlas as big as the world.

Measure, says the book of maps.

But given by whom?

The tiny plane hovering above the shoreline,

the slow page from Trabo,

the prows of Aeneas, Odysseus,

or how the sea changes to paper,

the waves into words,

the exactilng task of shrinking,

the art of meter and time.

Were the dogs visible on the spit of land?

The death of flies poison of the flowers,

the track of the enemy,

the surveyor in his hotel?

Who followed the train with future dead,

measured the slowness of the way?

Fate is not set down on maps.

Fate is all ours.

of coordinates, words of magic

for the world as a thing.

But I go with my living earth

of rivers and marshes, bends and willows,

which I compose in my image.

When I retrace them I leave my seal,

But then, are your ideas so clear

the mailman asked. Just at that moment

but that was another matter,

things around here happen that way,

from one moment to the next.

That means rain, he said, and it did.

Big drops. Behind him I could see the bay,

a plane leaden in the clouds,

Where do such seconds go?

How much rustling can be missed?

Which conversations cannot be

pulverized against the time-wall, in a lapse

of memory, somewhere at the bottom

Fiction, a house on a hill,

the psalm of rain, page six,

that fat of time

So many forms of existence? So many creatures

to suffer and laugh in these stony hills!

The figtree is bent toward the south,

above us the soft snoring of a plane.

My friend is waiting near a bush with sharp thorns.

He knows the story of his fate,

we see the glitter of the sea

among gallnuts and thistles, a sail in the distance.

Everything sleeps. give me some other life and I won't take it.

Shells and crickets, my cup is full of eternal noon.

The stream I drank from yesterday was cool and clear.

I saw the laurel tree's reflection. I saw the shadow

of the leaves drifty away across the bottom

This was all I ever wanted. Harbalorifa!

My age hangs on a thread. So I am the spider

above the path, weaving its polygonal time