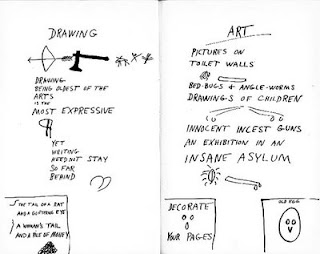 Born in 1886 in Chicago, Illinois, Robert Carlton Brown attended the University of Wisconsin and at age 22 began writing for magazines and newspapers in New York City. He began writing his highly personal and idiomatic poetry around 1914, focusing on an unpretentious, playful manner that related to and was published in the Dadaist magazines such as Marcel Duchamp’s The Blind Man, which presented two of Brown’s poems in its second issue of 1917. Brown’s early books include Tahiti; 10 Rhythms (1915), published by the legendary Guido Bruno, and My Marjonary (1916). Brown also wrote fiction, publishing more than a thousand short stories. He was a best-selling novelist, the most famous book of which was What Happened to Mary, published in 1913. That publication and the movie made from it, allowed him to retire in 1928. Brown lived for long periods in many locations throughout the world, at one time editing a journal in Brazil and publishing books at Cagnes-sur-Mer by D. H. Lawrence and Archibald MacLeish on his Roving Eye Press imprint.
In 1931 Nancy Cunard's Hours Press published Brown's collection, words, which consisted on poems printed in 16 point Caslon and microscopic poems, readable only through the use of a magnifying glass. The combination created a game-like interconnection between the two pieces (the mico-poems appearing on the first and sometimes the second page of the larger poems), while suggesting popular genres such as those described in detective journals where messages were hidden within the texts.
Another spirited experiment was published by his own Roving Eye Press the year previous, an anthology titled Gems: A Censored Anthology, in which Brown took numerous Victorian poems and blocked out certain words the ways public censors had deleted passages of works such as James Joyce's Ulysses and Djuna Barnes' Ryder. The result, obviously, was that perfectly ordinary and mundane works suddenly appeared to any half-witted  reader as being filled with juicy textual passages. His introduction to the volume is wonderful riff on the history of censored literature. In 2014 scholar-critic Craig Saper, reviving Roving Eye Press, published a facsimile edition of this book (RovingEyePress@gmail.com).

Other works of Brown’s were published in Harry Crosby’s Black Sun Press and reprinted in 1959 by Jonathan Williams’ Jargon Press. In 1931 Brown edited a volume of experiments by Gertrude Stein, Ezra Bound, Eugene Jolas, Kay Boyle, Robert McAlmon, Williams Carlos Williams and Charles Henri Ford. Readies for Bob Brown’s Machine, which used a tachistoscope-like reading machine which presented “a moving spectacle,” that ran “on forever before the eye without having to be chopped up into columns, pars, etc.” That book, also, was reprinted by Craig Saper (email listed above).
Globe-Gliding was published in 1930.
Brown was also the author, with his mother Cora and wife Rose, of several cookbooks. Among his noted writings on food are Let There Be Beer, a celebration of the end of Prohibition, The Wine Cook Book, America Cooks, The South American Cook Book, The Vegetable Cook Book, The European Cookbook and The Complete Book of Cheese.

I chew tobacco moistly
And keep the aquarium.
My gold fish are goopy eyed
And droopy;
the lady ones wear bridal veils
And float about the drawing room
Languorously toying with their
Gorgeous Japanese fans
(That stupid folks call fins)
Closing and opening them dreamily,
Like soft-eyed Spanish senoritas;
Flirting with me,
Flashing filmy handkerchiefs of crepe
And lace before my fascinated eyes.
Pruning their weeping willow tails
For my praise.

I keep a convey of speckled fish
Like quail
And when they fly up in a flock
Greedily gobbling bubbles at the
Top of their tank
I look sharply about
To make sure no sportsman
Has smuggled in a gun
To take a pot shot at my pets.

Stupid fish I’d rather eat than look at,
But my gay, gorgeous ones
Fill the eye better than the belly.
My velvet ones,
Pattern models for silks
By Paul Poiret.
My fluttery, friendly,
Moving fellows;
Futurist fancies
Cubist conceptions
And Whistlerian butterflies
With peacock tails
Straight from Paradise
That little Japs
Would fly for colorful kites
From moss green river banks
Into the swirling blue sky
As they do in Hiroshige prints.
I laugh at my funny fish,
Poke my finger playfully
At the glass
Where lurk my spunky, grumpy
Spiteful ones.

I’ve some that swarm like bees around a queen,
Or cannibals about a missionary.
Silly-headed, bobby ones
Always agitated
Fluttering about
On futile-minded businesses.
Athletic ones that go in for
Swimming.
And a lot as common and bickeringly content
As chirping sparrows.

I never like to pass the ponds
Of my goopy nightmare fish
After dining late.
I take out my key a bit nervously
And slip softly in,
Skirting round the other corridor
Where the ghoul eyed submarine fellows
Blink all night,
I sneak as softly as I may
To bed
Without disturbing the ugly looking imps
Whose orbs glint phosphorescently at me;
Never looking into evil
Bad luck fire opal eyes
Or pausing where ghost fish glide;
Restless souls that haunted hulks
Of sunken ships in former incarnations;
Their flashing eyes shooting looks at me like
Serpent’s fangs of flame;
Crafty, greedy watchers
That follow my course all the way to bed
As I pass along the chilly corridor.

In the morning
With a fresh quid in my cheek
I chew tobacco moistly
And pass bolding through my aquarium,
Coaxing modest rock fish from their hiding places,
Watching my finny chameleons
Change color like sixteen year old girls.
I go to say good morning
To my flappy old soft-backed sea turtle
Who looks like a floating strip of wall paper.
I crumble crackers with friendly fingers
For my parrot fish,
And sometimes wish I could throw
A sort that resembles
Sniffing pious hypocrites in pews
To my big moray
Who sits smug in a length of sewer pipe all day,
Looks like a boa constrictor
And eats like a pig.

Oh, I have a taste for fish.
My most intimate ones
Are open-eyed innocents,
Some like buttercups,
Others like petals of Japanese quince bloom.
Sometimes I wonder
Who washes the ears of my pink tinted
Shell luster dears.
And though I’ve worked here
Most all my life
I’ve never found out who keeps the colors
Fresh
On the hand-painted oriental ones
Imported from Malay.

In the lot I’ve some chic little sets for rings.
When I fall in love with a mermaid
(If I can ever find one on land)
I know a special black opal frisker
I’m going to hang round her neck for a pendant.
But I’ll never get married
Till I find a girl with hair of burnished gold
As beautiful as the scales
(Which I call petals)
Of my Bermuda Brilliant.
Teeth with the sheen of a shad.
A look sparkling and iridescent
Like my rainbow fish.
But even if she never comes
I’ll keep jogging along content;
Pruning my flower garden of fish,
Looking after their teeth, tails and morals
Like a mother would,
Walking meditatively, watchfully
Through the pleasant paths of my aquarium,
Chewing tobacco moistly
And feeling very much at home.

My love is a tidy cannibal girl
Far off on a pink coral isle.
When I am pleased with here
I crack cocoanuts with my strong white teeth
And drop them bit by bit into her smiling mouth.
Together we gnaw the bones of
White men
Ship-wrecked on our coral isle.
And we laugh while we eat.
Our digestion is robust
We never take pink pills
To condition our conscience.
and when I am tired of my
Wholesome love
I shop back here in my submarine
and write poems in this dull little room,
Love poems to my dainty Duckewawa,
Far off on our cannibal isle of coral.

A Resolution Made at Bronx Park


I’M GOING TO GET
A GREAT BIG
FEATHERBED
OF A PELICAN
AND KEEP HIM
IN THE HOUSE
TO CATCH THE
FLIES, MOSQUITOES AND MICE,
LAY EGGS FOR ME
TO MAKE OMELETTES OF,
AND BE MY DOWNY COUCH AT NIGHT.

For a complete book of Brown's visual poems, click below:
http://www.ubu.com/historical/brown/index.html
Posted by Douglas Messerli at 8:14 AM