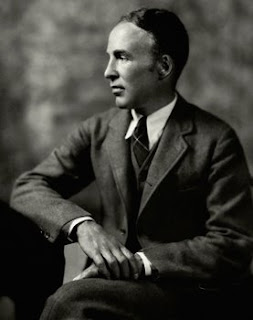 Born in Glencoe, Illinois, Archibald MacLeish was the son of Andrew MacLeish, a dry-goods merchant, and his third wife, a college professor, Martha Hillard. The father was reserved, stern, and removed from his four children. The mother worked to develop in them a strong sense of social responsibility, which would come characterize MacLeish’s own life.
He spent his childhood on their estate on Lake Michigan, attending a private school, Hotchkiss, from 1907-1911 before attending Yale University in 1911, where he majored in English. At Yale, MacLeish wrote poetry and was involved in campus literary and social activities, as well as participating in college football. In 1915 he graduated from Yale, and entered Harvard Law School in the fall. The next year he married Ada Taylor Hitchcock, with whom he had four children, one of them dying in infancy.
Upon the U.S. entry in World War I, MacLeish enlisted as a private in Yale’s hospital unit, but soon shifted to a combat unit. At the same time Yale University Press published his first collection of poems, Tower of Ivory (1917).
MacLeish returned home from the war without his beloved younger brother, Kenneth, who had been killed in air combat. Upon completing his law degree, MacLeish taught government at Harvard briefly before joining the Boston law firm of Choate, Hall, and Stewart. He was successful as a lawyer, but found it confining since he gave him little opportunity to write. He 1923 he was offered a partnership, but MacLeish chose instead to quit the firm, his father promising to support him and his family.
Taking his family to Paris in order to live more cheaply, MacLeish remained there for five years, befriending the numerous émigré American writers already living there, including Hemingway, Dos Passos, Fitzgerald, and Cummings. In order to transform himself into a modern poet, MacLeish learned Italian and studied the history of English-language poetry. Over these years, he produced five books, including The Pot of Earth (1925), Nobodaddy (1926), Einstein (1926), and The Hamlet of A. MacLeish (1928). Several of the poems of this period— including “Memorial Rain,” “You, Andrew Marvell,” and “Ars Poetica”—would become his most famous works.
Returning to the United States in 1928, he and his family moved into a farm in Conway, Massachusetts. In New Found Land of 1930, MacLeish proclaimed his love of the United States, despite his attraction to Europe. Another long poem, Conquistador (1932), dealt with issues symbolizing the American experience. In 1933 he won a Pulitzer Prize for that work.
Soon after his return to the U.S., MacLeish began writing from Henry Luce’s magazine Fortune, contributing numerous pieces on the American and international scenes and defining his relationship between art and society. Rejecting the modernist alienation from society and emphasis on the individual, MacLeish saw the poet as inevitably involved in his society. During the later 1930s, as Americans and their culture suffered under the depression, MacLeish wrote a number of radio and stage plays that dealt with current issues, Panic (1935), The Fall of the City (1937), and Air Raid (1938) among them.
Despite his strong American sentiments, MacLeish also criticized American values, arguing that Americans had no clear vision of their national goals and potential, something which he felt poetry could offer. But he was also highly criticized for these views as well as being scorned by the modernists for attempting to write a “public” poetry. The left attacked him, accordingly, as an unconscious fascist and the right saw him as a communist sympathizer, coining the word “fellow traveler” in particular reference to him.
His rising liberalism brought him into the circle of Franklin D. Roosevelt’s presidency, and later he would write speeches for the president. In 1939 Roosevelt nominated him to become the librarian of Congress, an organization he would radical reorganize. He 1941 he also directed the information/propaganda agency, the Office of Facts and Figures, moving from there to become the assistant director of the Office of War Information from 1942-1943. These positions left him little time for poetry.
Upon Roosevelt’s death, MacLeish returned to private life, writing, in 1948, his first collection of poetry since the late 1930s, Actfive andOther Poems, a statement of his continued love his country but also his ultimate disillusionment with its actions. In 1949 Harvard offered him a position as the Boylston Professor of Rhetoric and Oratory, a position he held until his retirement in 1962. During this period he continued to write, publishing Collected Poems 1917-1952 (1952), which won him his second Pulitzer Prize. His disgust with MacCarthyism resulted in the play The Trojan Horse, published the same year. In 1955, after a visit with Ezra Pound at St. Elizabeths hospital, MacLeish fought for Pound’s release, which was accomplished in 1958. That same year, he finished his Broadway play, J. B., a work based on the biblical tale of Job. The play won another Pulitzer Prize.
After his retirement from Harvard, he continued to be active in writing and journalism, writing another play Herkales in 1967. He died in Boston in 1982.

Your blog on Archibald was a thrill to read. I thoroughly enjoyed it.

Here's my blog on archibald macleish, check it out: http://malloryegr5.edublogs.org/