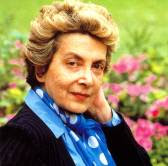 Born in Cairo, Egypt, Andrée Chedid grew up in a family of mixed Lebanese and Egyptian ancestry. She attended French schools, matriculating at the American University of Cairo. In 1942 she married a physican, Louis Chedid, and moved with him to Paris in 1946.

Chedid had already begun writing poetry, and would continue to publish works from 1949 onward. Her first major book, Textes pour une figure (1949) was followed with almost a book a year until the 1990s. Her major collected poems appear in Textes pour un poème, 1949-1970, published in 1987.

Chedid also published fiction beginning in 1952 with Le Sommeil de livre (From Sleep Unbound), and through the years has become a major novelist. Her work has been widely translated and established a noteable international audience. Among her other works of fiction are Le Sixieme Jour (The Sixth Day), La Maison sans racines (The Return to Beirut), and L'Enfant multiple (The Multiple Child).

Unlike her fiction, grounded as it is in the images and emotions of the Middle East, her poetry is, as she describes it, "free of time and place," having "no geographical boundaries," and belonging "to all lands." Her poetry is often autobiographical, but in its mix of history, fiction, myth and on occasion, magic, it is distilled from larger issues.

Chedid is also a well-known dramatist. She continues to live in Paris, where, despite her concerns with her heritage and her knowledge of Arabic, she feels most at home.

[Most of the poems printed below appear in Fugitive Suns, which may be purchased here.]

There pines bend
And fall into the ravines

Furtive winds beathe iln the trace
of my steps

I run toward the taciturn bridge
Which gathers the abyss

There is no epilogue

Even if the forked tree
Breaks in two


Nothing is there
But a star village
Resting heavily on a hill.

—Translated from the French by Judy Cochran

But the sky lowers agailnst these hills
Lost the oracle's cries
The steps of the stranger lost
Soon as well the image
memory betrays
And we, unable to name our destiny
Lost for words among the shadows
What do we carry to our death?

Life the lure that leads us on


I ran off with the child-king, who believed in the journey.

Over the bleak roofs, I cast our cloak of oblivion.
Then we fled,
Leaving the old oak's torn shadow
The creids of terror,
The sharp angles of our walls.
On my right shoulder, I carried the child-king.
Our footsteps across the parched land
Were as yielding as the throats of birds.

The child's eyes widened in the sun;
His garden, where silences reside,
Flourishes beneath the tree of life.

Because nothing is siimple, I ran off with the child-king

Now we are together:
His springtime
My autumn
Our magic
And my step.

—Translated from the French by Judy Cochran

Proofs in Black and Gold

Streams down
The shoulders of summer


—Translated from the French by Lynne Goodheart and Jon Wagner

Its single target a delusion
Sowings abound
Harvests are legion

Unable to name anything
I feel no call

From little deaths
to brief resurrections


—Translated from the French by Lynne Goodheart and Jon Wagner