Born into the noted Boston family, Amy grew up on the Sevenels estate of her family in Brookline. She was educated at home by governesses and, later, at private schools. At the usual age of 17, she debuted into Boston social life, attending numerous dinners in her honor. Although she considered a career in the theater, her weight delimited her possibilities.

Lowell continued to live the life of an upper-class Bostonian until 1910, when the Atlantic Monthly accepted four of her sonnets. Two years later, she published her first collection, A Dome of Many-Colored Glass. That year also she met Ada Swyer Russell, an actress who gave up her career to live with Lowell at Sevenels. 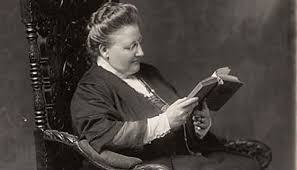 The same year, Poetry magazine was founded in Chicago, and Lowell, transformed by the literary changes around her, particularly by the poems of H.D. [Hilda Doolittle] and Ezra Pound’s attachment of H.D.’s work to “Imagism.” Lowell traveled to London to introduce herself to Pound, H.D. and F. S. Flint. Lowell returned to the U.S. a convert to the new “movement,” and published poems over the next year in Poetry, The Egoist, and Pound’s Des Imagistes. She also published a new book, Sword Blades and Poppy Seed.

Upon her return to London in 1914, however, Pound had become dissatisfied with the direction Imagism had taken, particularly because of Lowell’s involvement in it. Rejecting Imagism as “Amygism,” Pound argued for a new movement of energy, “Vorticism,” which stood apart from Lowell’s perception of Imagism as a more quiet perfection of expression. Accordingly, Lowell took over the editing of further Imagist volumes, and Pound refused to participate in their production.

Over the next several years, through lectures, anthologies, and her own collections—which included a wide variety of literary styles—Lowell popularized Modernism and, in particular, vers libre or free verse, attracting a wide range of readers that Pound and others might never have reached.

By the time of her death in 1925 of a cerebral hemorrhage, Lowell had become a major figure of American poetry, and her volume What’s O’Clock was awarded the Pulitzer Prize in 1926 posthumously.

Spread on the roadway,

They swoop down the hillside,

She lies with her bosom

Beneath them, no longer

The Virile -- but rotting

The smell of her, tainted,

Has bitten their nostrils.

And shadow the sun with

I walk down the garden paths,

And all the daffodils

Are blowing, and the bright blue squills.

I walk down the patterned garden-paths

In my stiff, brocaded gown.

With my powdered hair and jewelled fan,

I too am a rare

Pattern. As I wander down

My dress is richly figured,

Makes a pink and silver stain

On the gravel, and the thrift

Just a plate of current fashion,

Tripping by in high-heeled, ribboned shoes.

Not a softness anywhere about me,

Only whalebone and brocade.

And I sink on a seat in the shade

Of a lime tree. For my passion

Wars against the stiff brocade.

The daffodils and squills

Flutter in the breeze

For the lime-tree is in blossom

And one small flower has dropped upon my bosom.

And the plashing of waterdrops

In the marble fountain

Comes down the garden-paths.

Underneath my stiffened gown

Is the softness of a woman bathing in a marble basin,

A basin in the midst of hedges grown

So thick, she cannot see her lover hiding,

But she guesses he is near,

And the sliding of the water

Seems the stroking of a dear

What is Summer in a fine brocaded gown!

I should like to see it lying in a heap upon the ground.

All the pink and silver crumpled up on the ground.

I would be the pink and silver as I ran along the paths,

And he would stumble after,

Bewildered by my laughter.

I should see the sun flashing from his sword-hilt and the buckles on his shoes.

To lead him in a maze along the patterned paths,

A bright and laughing maze for my heavy-booted lover,

Till he caught me in the shade,

And the buttons of his waistcoat bruised my body as he clasped me,

With the shadows of the leaves and the sundrops,

And the plopping of the waterdrops,

All about us in the open afternoon --

With the weight of this brocade,

For the sun sifts through the shade.

Underneath the fallen blossom

Is a letter I have hid.

It was brought to me this morning by a rider from the Duke.

"Madam, we regret to inform you that Lord Hartwell

As I read it in the white, morning sunlight,

"Any answer, Madam," said my footman.

"See that the messenger takes some refreshment.

And I walked into the garden,

Up and down the patterned paths,

In my stiff, correct brocade.

The blue and yellow flowers stood up proudly in the sun,

I stood upright too,

Held rigid to the pattern

By the stiffness of my gown.

Up and down I walked,

In a month he would have been my husband.

In a month, here, underneath this lime,

We would have broke the pattern;

He as Colonel, I as Lady,

On this shady seat.

He had a whim

And I answered, "It shall be as you have said."

Now he is dead.

In Summer and in Winter I shall walk

In my stiff, brocaded gown.

The squills and daffodils

Will give place to pillared roses, and to asters, and to snow.

And the softness of my body will be guarded from embrace

By each button, hook, and lace.

For the man who should loose me is dead,

Fighting with the Duke in Flanders,

In a pattern called a war.

Christ! What are patterns for?

Posted by Douglas Messerli at 2:12 AM