The daughter of an Italian father and an English mother, Rosselli was born in Paris in 1930, and spent her childhood in France. Growing up speaking French, English and Italian, Rosselli was, from her childhood on, multilingual, which, turn, would highly influence the syntactical complexity of her poetry. 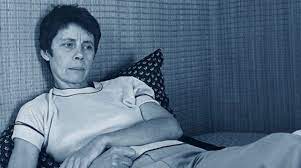 The second determining factor of her life, the fact that she experienced the murder of her father, the anti-Fascist martyr Carlo Rosselli, and her brother─both brutally killed, by order of Benito Mussolini and Galeazzo Ciano, at Bagnole-de-l'Orne, Normandy. This event, and its aftermath─during the war she and her mother traveled throughout Europe to escape the Nazis─would have a lasting effect on her mental health. Much of her life was spent in therapy, and in 1996 she leaped from her high-rise apartment to her death. Rosselli herself has described the death of her father leaving an emotional void, which she attempted to fill through her writing.

The second determining factor of her life, the fact that she experienced the murder of her father, the anti-Fascist martyr Carlo Rosselli, and her brother─both brutally killed, by order of Benito Mussolini and Galeazzo Ciano, at Bagnole-de-l'Orne, Normandy. This event, and its aftermath─during the war she and her mother traveled throughout Europe to escape the Nazis─would have a lasting effect on her mental health. Much of her life was spent in therapy, and in 1996 she leaped from her high-rise apartment to her death. Rosselli herself has described the death of her father leaving an emotional void, which she attempted to fill through her writing.

Influenced by writers such as Giuseppe Ungaretti, Cesare Pavese, Sandro Penna, and Eugenio Montale, Rosselli began moving toward literature as a career. In the late 1950s she was already writing some of her earliest lyrics, some of which were to be included in her two major early books, Variazioni belliche (1964, War Variations, 2003) and Serie ospedaliera (1969, Hospital Series). These two early works her championed by Pasolini and others. Her third major collection, Documento, 1966-1973, published in 1976, followed by a hiatus from poetry for several years, until she published Impromptu (1981) and Appunti sparsi e persi (1983). Rosselli also composed experimental musical compositions of musica concreta.


Poems from War Variations
Roberto, mother calls out, playfully rocking on the white
divan. I do not know
what God wants of me, serious
intentions rending eternity, or the frank laughter
of the puppet hanging from
the railing, railing yes, railing no, oh
postpone your heartfelt prayer with
a moving babble; car the dry and yellow leaves ravish
the wind that stirs them. Black vision tree that tends
toward the supreme power (pasture which in fact I
think bleaches instead the ground beneath my feet, you are
my lover if the sky darkens, and the shiver
is yours, in the eternal forest. Empty city, full city, city
that soothes the fantastic for
the most part pain of the senses, you sit
sweltering after the meal you made of me, toy of leveling wind
from the coast I no longer dare
to face, I fear the red wave
of actually living, and the plants that say goodbye. Tom-
boy I straddle your bridges, and make them maybe
my own
nature.
I no longer know
who comes and who goes, let
delirium transform you into a senseless
gaming table, and the wild broom (room) faces out
spreading your sun across the reflecting glass.

I was, I flew, I fell trembling into the
arms of God, and may this last sigh
be my whole being, and may the wave reward,
held in difficult union, my blood,
and from that supreme deceit may death
become vermillion be given back to me, and I
who from the passionate brawls of my comrades plucked
that longing for death
will enjoy, finally─the age of reason;
and my all the white flowers along the shore, and
all the weight of God
beat upon my prisons.

What is it with my heart that beats so softly
and esperate makes, maketh
the hardest soundings? you Those
tutories that I imprinted on afore he
tormented himself so
fiercely, and are vanished for him! O if mye
rabbits coursing throughthe nervies he for
frosty canals of my lymph (o life)
they don't stop, then yes, tha' I, me
yetsaclose to they dead! In all sinceauity my soul
may you remedy it, I ambrace you, you,─
may you find der Softe Worde, may you return
to the fathomed tongue that allows love to stay.

tomorrow's claws, ignite in deaf
whirpools the lympth of your growth; don't
gothere; don't play with
your strength in the hell of wind and
hail today obliges your majesty to bow! If
you believe in the grammar of the poor, listen then to
the growing envy of the rich,─you will soon get used to
being born one of them.

And who can guarantee you are not one of those
who die on the shovel instead─who can warn
me of your spider web. Too late I
called the flies to shelter.

and what did that crowd want from my senses other than
my scorched defeat, or I who begged
to play with the gods and stumbled
like a poor whore up and down
the dark corridor─oh! wash my feet, take
the fierce accusations from my
bent head, bend
your accusations and undo all
my cowardice!: it wasn't my wish to break the delicate layer of ice
not my wish to break the mounting battle, no, I swear, it wasn't my
wish to break through your laughable
laughter!─but the hail has other reasons than
serving and the wet eastern wind of
evening does not dream of standing
watch by my
disenchanged lion sobs: no longer will I run
after every passage of beauty,─beauty is defeated, never again
at attention will I snuff out that fire now glimmering like
an old tree trunk
in which hollow swallows make nonsensical nests, child's lay,
unreckoning misery, unreckoning misery of sympthy.

That violent rustling of birds, their flirtatious
rising in swarms from the hardest trees
(the tender lion roars in a flight of thought
and my faith lights up) their perching on the thinnest tops
their distracted gazing into the distance, this
is your desire, flying over my mountains of anxiousness
this is your warm thread of unknowing
anxiousness.

Inside of grace the number of my friends increased
and joy wove stories of impossible loves. Inside of
grace the poor tormented the rich and the hat was lifted
in an act of pure gratitude. Inside the Tao boredom vanished
outside of grace the murdered poet rhymed. Inside of
grace the passing bird dirtied the furniture
yesterday the day before yesterday there was a compass, today
the rain sadly pours and the promises of the rich are
a light that does not add up. Close to grace lay
love inside of grace every flower looked bad and at dawn
hell dirtied very light. Outside fury a hurricane
sinisterly scoured the main avenue of all our
frenzies. Such is the birth─such is the revenge of
the poor in spirit. Against the spirit of mercy
arose unanimous my salacious heart that came down touched
by grace but was unable to find the daytime sun except
in a cry of business. To find Chaos again a clarinet's
note was enough. (Indifference itself.)

We count endless dead! the dance is almost over! death,
the explosion, the swallow lying wounded on the ground, disease,
and hardship, poverty and the devil are my cases of
dynamite. Late I arrived to pity─late I lay among
bills in the pocket troubled by a peace that was not offered.
Near death the ground returned to the collectors the price
of glory. Late he lay on the ground that returned his blood
soaked with tears peace. Christ sitting on the ground on
reclined legs also lay in blood when Mary labored
with him.

Born in Paris labored in the epos of our flowed
generation. Lay in America among the rich fields of landlords
and of the stately State. Live in Italy, barbaric country.
Fled from England, country of sophisticates. Hopeful
in the West where for now nothing grows.

The bamboo-café was the night.

The congenitals' tendency to goodness awakening.

The hell of light was love. The hell of love
was sex. the world's hell was the oblivion of the
simple rules of life: stamped paper and a simple
protocol. Four beds face down on the bed four
friends dead with a gun in their hand four keys
on the piano that give back hope.


─Translated from the Italian by Lucia Re and Paul Vangelisti

I sell you my cooking stove, then you scratch it
and sit unprepared on the desk
if I sell you the light yoke of
my diseased mind, the less stuff I have, the
happier I am. Undone by the rain
and by sorrows immeasurable menstruation
senility approaching, petroleum
imagination.

Search for an answer to an unconscious voice
or believing, through it one's found it─I saw the muses
dazzled, spreading empty veils on their hands
not correcting themselves at the portal. Searching for
an answer to reveal, the oriastic meaning of events
the particular obfuscation of a fate
that through brief rips of light opposes─the only sense
this prestigious act: that does not forget, lets
the walls graze the skin, suffers no estrangements
and does no revolt, against this shattering
and sobbing hurt, that is my moon on the face
the smell of angels on the arms, the step firm
and not concealed: the ruin slow by complete:
a non-detachment from low things, writing of them
supine.─Translated from the Italian by Lucia Re and
Paul Vangelisti
(from Serie Ospedaliera, 1969)

Crisis of bovarysm
crisis of impoverishment!
crisis of flowers
crisis of workers

Dialogue is done in four
like a diagonal line
I describe buses
I start up again
more prayers
why are the trees blue?

(Things themselves
sow my heart with light)

As if I knew what the opposite means
things quite remote in the small homeland
outside the forest, and from the tropical heaps
in the beige of the tricolor
morgana with uncorrupted wings
in the poverty turned by now into a horrid kennel
victim that perpetuates her pain
as if truth were reborn from this clash
with the putrid air of these lost faces
in the unromantic hour of the very late morning
what if now you said
what is not conveniently said
in poetry?

─Translated from the Italian by Lucia Re and Paul Vangelisti

When on a tank I get close
to that which was a tango, if

mercy was with me
when I won, or instead

if the late night were not
now the morning hour, I would

no longer write these beautiful
notes!─You really torture me?
and really teach me not to
torture the agonizing mind

of others without agony, though
missing in the sun of all the

splendid money you recognized
in that Capital of vice

that was Rome? And you ash-tree
a long brother of once
called Pierpaolo, a memory

to cast the last look
from the last bridge.─Translated from the Italian by Lucia Re and Paul Vangelisti
(from Impromptu, 1981)

Why is her poetry (her wonderful poetry) so out of print or difficult to find ? It's a huge shame !