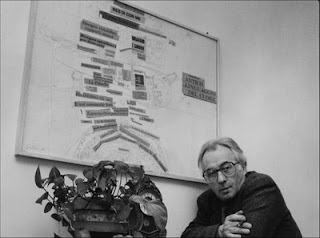 In addition to being the poetry editor of Il Verri between 1957-1961 and the director of the bimonthly Quindici from 1967-1969, he is a regular contributor to the literary pages of the daily La Republica.

Guiliani edited the important anthology of Italian poetry, I Novissimi, in 1961, containing the poetry of his friends, Elio Pagliarani, Edoardo Sanguineti, Nanni Balestrini, Antonio Porta, and his own work.

Giuliani has translated work by such modern writers as Dylan Thomas, T.S. Eliot, William Empson and James Joyce, as well as Ben Jonson and Shakespeare.

You can watch the Poetry war: Alfredo Giuliani vs. Ariodante Marianni at this link:http://www.youtube.com/watch?v=6it6staOpLo

-Translated from the Italian by Michael Moore