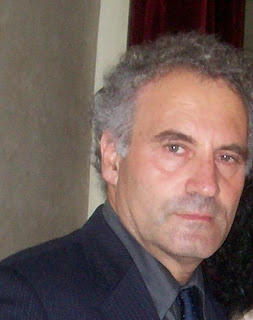 Born December 2, 1952 in the Adriatic port city of Durrës, Albania, Visar Zhiti was the son of the stage actor and poet Hekuran Zhiti (1911-1989. The young Zhiti grew up in Lushnja, where he finished school in 1970. After his studies at a teacher training college in Shkodra, he began his teaching career in the northern mountain town of Kukës, demonstrating an early interest in verse, with a few publications published in literary magazines.

In 1973, as he prepared a collection, Rapsodia e jetës së trëdafilave (Rhapsody in the life of roses) for publication the so-called Purge of the Liberals broke out in Tirana at the Fourth Plenary Session of the Communist Party. Zhiti’s father had earlier come into conflict with the authorities, and the young poet suddenly became one of the many political scapegoats selected in order to intimidate the intellectual community. The manuscript of his collection, which had been submitted to the editors of Naim Frashëri publishers, was now seen to contain grave ideological errors and was seen as blackening socialist reality. Zhiti and his works were denounced, and with no support by his fellow writers, he had nothing he could say to his interrogators to prove his innocence. He was arrested on November 8th, 1979 in Kukës and forced into solitary confinement. Pen and paper were forbidden. In order to maintain his sanity, he composed and memorized over one hundred poems. Sentenced at a mock trail in April 1980 to thirteen years in prison, he was taken Tirana jail and later transferred to a concentration camp in the isolated northern mountains that was similar to the Soviet gulags. Many of his fellow prisoners died of mistreatment and malnutrition or went mad.

He was released from prison in early 1987 and “permitted” by the Party to work in a brick factory in Lushnja, where he kept a low profile until the fall of Hoxha’s dictatorship. In 1991, he managed to get to Italy and worked in Milan until 1992. Through a scholarship provided by the Heinrich Böll Foundation, Zhiti visted Germany in 1993 and went to the United States the following year.

Upon his return to Albania, we worked as a journalist and was appointed head of the publishing company which had planned to print his first book. He was later employed by the administrative services of the new Albanian parliament and in1996 was himself elected to parliament. The somber realities of Albanian politics, however, soon let him to withdraw from politics. In 1997 he joined the Albanian foreign service and was appointed cultural attaché to the Albanian Embassy in Rome, where he remained until 1999.

His first book of poetry, Kujtesa e ajrit (The memory of the air) was published in Tirana in 1993, which included several prison poems. Hedh një kafkë te këmbët tuaja (I cast a skull at your feet) was published the following year. This volume contained all 100 poems composed in prison between 1979 and 1987, verse which had survived only in his memory. Numerous volumes followed, and he is now recognized as one of the major Albanian poets of the 20th century. He has also written numerous short stores, collected in two volumes, and translated works by Garcia Lorca and the Italian poet Mario Luzi into Albanian. His prison memoirs, Rrugët e ferrit: burgologji (The roads to hell: prisonology) was published in Tirana in 2001. In 1991 he was awarded the Italian “Leopardi d’oro” prize for poetry and in 1997 he received the prestigious “Ada Negri” prize.

[The poems below are from The Condemned Apple: Selected Poetry (Los Angeles: Green Integer, 2005. You can purchase the book here.]


Elegy of the Forest

The forests have shrunk
And fear has expanded,
The forest have dwindled,
There are less animals now,
[less courage and less lightning,
[ less beauty
[and the moon lies bare,
[deflowered by force and
[ then abandoned.

The forests have shrunk,
Poetry, sighs have diminished,
There are less words for leaves
[and more rumors.

The forests have shrunk,
The rivers have lost their magic,
The rivers are bewildered,
[They observe us like zebras in a zoo.

The forests have shrunk,
And shame has shriveled,
How little shame we now have,
We regret nothing at all,
We have no little time to regret.
The roads have grown,
[so have the billboards and dilemmas,
[warehouses, cinemas and praise.
The cities have grown,
And shame has expanded
[All that shame the newspapers cannot contain,
[to be continued in the next issue
[and in the next year’s subscription of folly.

The forests have shrunk
[and the forest protection units have grown.
Love has recoiled
[and the birds have less room
[for their lovemaking,
For they cannot make love in office buildings.
Faces have receded.

A little boy draws trees on the walls,
Draws trees in my eyes,
Tattooing a tree
[ on his slender arm,
[like the end of the twentieth century,
Piercing it so often with this burning needles adrip with ink
[that the forest is in a frenzy of blood,
[ the festering sore of suffering.

How far my night is
[from your night!
Other nights rise between them like impassable
mountains.

Rain is falling, robbed of hope.

Tomorrow at dawn, shall I send out a rainbow
To look for you? But, as naïve as joy itself,
It can only cross one mountain.

I finally made it to the Colosseum,
The last slave, with open wounds,
The tiger teeth of tyranny still in my body.
The gigantic walls of antiquity, labyrinths of life,
Crosses and staircases falling like death,
Steps ascending like the cries of the masses,
Up there were the seats of my rulers,
I see their evil, stubby fingers,
Thumbs turned down, demanding my death,
No shadow is cast by those hands, only black blood,
They slew my best friend, sliced me to pieces with a sward,
Cast my bowels away and tore me up like the streets of Rome.
But now I am quiet. Not curious at all. I don’t want to talk
To the bothersome tourists. I have come here
As if from the dead, not in an embassy limousine.
I got out like a ghost in the middle of day,
In the middle of Rome, in the middle of Oblivion.

The day gapes open
Like an endless chasm under my feet.
How can I fill it to enter the next day?
Hundreds of times have I heaved myself into it,
[trodden upon myself.
Descent into solitude!
I have been left without the comfort of human voices
[as if without fire.
Barefoot day after day
I walk back and forth
With nowhere to go.
There is no road under my feet,
No one here to say “good morning,”
They hurl a broom at me
And make me sweep the floor
[of my misfortune.
And I, gone mad, scream in silence:
Hi there, world!
You may have forgotten me,
[but not I, you.

There I stood before an Apple
How could I not be overjoyed?
An Apple,
Apple, Apple,
Which brought to earth the love of Adam
[and Eve from the deception of paradise,
It fell from a branch,
[proving to us the theory of gravity.
An Apple
As red as kissed lips
What enigma does it withhold, what desire
That even war cannot overcome?
Apple,
A dream to be grasped above the heads of men.

And they even arrest Apples!...

When they take me to the interro(r)gation room
The interrogator shouts: you, you, ou, ou, u, u
Read the book ‘Apple’ by Yevtushenko.
“No,” I reply.
“We have evidence you’ve been translating poetry.”
“No!” I lie.

All night
The leave me standing in a corner.
Into my face they blow cigarette smoke
[spewing out of their throats,
The fumes of civil war,
What ghost does it conjure up, or is it from our ruins?
What can I do? I wrap around myself
Like the Apple hiding in the leaves.
The seed inside
Must be protected.
Words must be shrouded,
Songs must be sheltered
[until the chasms of day are sown with apples
Let them shoot us in the head,
My blood will grow roots
[and will blossom.

A cigarette butt lay burning
On a green leaf. Some confused being
Had probably thrown it into the flowers.

And I was thinking about the prisoner who took it,
How could he be an enemy?

I came across a marble angel
With wings
Made for a tombstone,
[that afternoon.

It held a white chisel
And a white hammer
In its alabaster hands,
It was sculpting a face
[to save it from death.

Oh angel,
What are you doing among the graves?
Come and carve our faces,
Remove the excessive, fatal features.
They have been few
Since the creation of this world,
[ not only devils,
[but angels.


Buried a Second Time Over

Never to die
And to be buried twice over.

Massacred
And to wander as a ghost
Through bloody amnesia.

To have them shovel the rich soil
Over your face
And not to cover up the crime.

the Plain of Kosova
Has been sown for centuries with the dead
And it grows but the grain of life.

I gather the heads of grain as a last wish and testament,
Make a bundle and whimper.

the dead do not die!

“Elegy of the Forest,” “Love,” “The Colosseum,” “The Condemned Apple,” “Prison Leaf,” “Angel in Holland,”and “Buried a Second Time Over”
Reprinted from The Condemned Apple: Selected Poems (Los Angeles: Green Integer, 2005. English language translation copyright ©2005 by Robert Elsie. Reprinted by permission of Green Integer.
Posted by Douglas Messerli at 9:38 AM