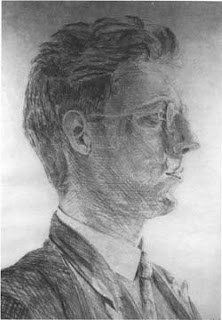 Born in Joure, Friesland—the northern province of Netherlands which includes part of the Frisian Islands—in 1906, Spanninga was a journalist and a publicist in the town Sneek for much of his life.

His first book of poetry, Spegelskrift, appeared in 1949, and he continued to publish books until the late 1960s. In 1951 he was the winner of the Gysbert Japicx-pris for his book Núnders. In 1968 he translated Rudyard Kipling’s “Mary Gloster.”

He died in Schagen on July 7, 1985. A posthumous collection Samle fersen was published by the Frisian Academy in 1992.

Look, my love! I have hung my tent with dark-glowing tapestries
and bright-flamed dresses from El Khahira.
When I am with you I feel world-weary.
You are the graceful bride
with whom I wander through the courtyards of meditation,
and my soul of stone becomes a well of mercy,
a pure well for gazelles
jealous of your youthful and light-footed allure.
In the carboniferous age long ago nature mixed the color
of your black locks
in which the fragrance of precious spices
in which my passions yearn to lie.
Never has a sheik’s horse had a more beautiful mane,
nestling on the oasis’ shadow.
Let your hair glide through my fingers
like a bewitching web of glossy silk
spun of the finest threads of primal matter on the spindle of the universe.
Your nose is a poem;
on your cheeks lie the bronze of northern autumns.
Your teeth are a string of pearls in the velvet of your mouth,
and your ears like rare shells
that an ocean ship scooped from the sea in the fresh tracks of the waves.
Your eyebrows were sketched in charcoal:
two small sickles, reaping passion.
Love is still slumbering between your breasts:
let me rouse it, daughter of the South.
You have exquisite arms and the perfect neck of a chamois;
What jeweler has flashing gems like your eyes,
fine-cut diamonds which millennia have chiseled,
sparkling like Orion?
And in them burns the mystic fire of mosque lanterns,
as if escaped from one of Scheherazade’s tales.
Yes, you are calligraphy from the Koran,
and the centuries find well-being in your appearance.
With you there is wonderful, restful repose
and the security of an infant,
in the happy pleasure
of playing ball with sun and moon and stars;
the turtle-dove and the hawk peacefully perch upon your shoulders.
The palm trees rejoice in your slender shape and supple limbs;
all trees halt their whispering and hang their leaves to listen
to the secret dialogue of our hearts.
I shall play the tambour for you,
and sing my sweet-sounding songs of the deserts,
for you are like a deer that dances over the hills,
fleeing the hunger.

—Translated from the Frisian by Peter Constantine

“Caravan Song”
Copyright ©2006 by Peter Constantine
Posted by Douglas Messerli at 11:55 AM