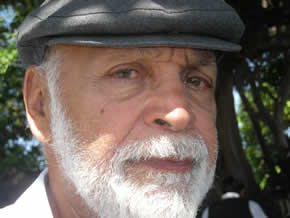 Born in the Honduran village of Yoro, where, as the author has described it, “it rains fish and airplanes,” Roberto Sosa is the major contemporary Honduran poet, winner of numerous awards from his own country and elsewhere.

His first work of poetry, Caligramas, written at a time when Sosa had not even heard of Apollinaire (author of Calligrammes), was a literary experiment that grew out of the magazine Pegasus. His second book, Muros (Walls) was self-published in 1966. But it was his third book, Mar interior (The Sea Within)—which won the Juan Ramón Molinas Award—and the following one, Pobres (The Poor)—winner of the Spanish Adonais Award in 1967—that brought him national and international attention. Sosa himself describes in the latter book a transformation in his poetics—a banishment of “of the obvious and worst of all rhetorical vices, pedantry”—that moved his poetry away from the purely literary to a more sociopolitical position. His 1971 book, Un mundo para dodos dividido, won the prestigious Cuban award Casa de las Américas, with the judges being the noted writers Eliseo Diego, Pablo Guevara and Gonzalo Rojas.


Sosa also edited the magazine Presente, a review of Central American arts and letters, and served as director of the University of Honduras Press. He is also a member of the Honduran Academy of Language and the Honduran Journalists’ Union.
Sosa died in 2011.