Robert Creeley was born in Arlington, Massachusetts in 1926. His father died before Creeley turned five. That and the loss of his left eye at a younger age were, admittedly, to mark his life. As a child he was brought up on a farm in West Acton. He was awarded a scholarship to Holderness School in Plymouth, where he received some of his most important educational experiences.
After graduating, Creeley attended Harvard University, but his stay there was interrupted by a year with the American Field Service in India and Burma (1944-1945). Returning to Harvard, Creeley published his first poems in Harvard’s Wake and in Cid Corman’s magazine, Origin. Soon after he married his first wife Ann and dropped out of Harvard without graduating. The couple moved to Provincetown, Massachusetts, and became friendly with the bohemian community of that city. The commute by ferry to Cambridge proved a distraction to the young poet, however, and the Creeleys soon moved to a farm in Littleton, New Hampshire, where he spent his time reading, writing, and breeding pigeons. There he also began a long correspondence with Charles Olson, which strengthened his resolve to see a literary career. 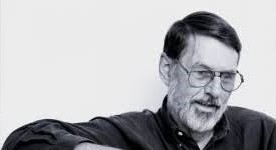 Seeking a less expensive existence, the Creeleys moved to Mallorca in 1951, and it was while in Europe that he published his first books of poems, Le Fou, The Immoral Proposition and The Kind of Act Of. One of these books and his collection of short stories, The Gold Diggers (1954) were published originally by his own press in Mallorca, Divers Press. Mallorca was also the setting for Creeley’s only novel, The Island, published in 1963. Creeley returned to the US to teach at Black Mountain College in 1954, and after a brief return to Mallorca, where he divorced Ann, he settled in 1955 at Black Mountain, editing The Black Mountain Review (1954-1957). Under the rectorship of Charles Olson, Black Mountain college had a teaching body of enormously creative individuals, including the artists Franz Kline and Willem de Kooning, composer-poet John Cage, dancer Merce Cuningham, and writer Paul Goodman.

Soon after his return to the US Creeley also published two new books, All That Is Lovely in Men (1955) and If You (1956). Soon after he moved to Albuquerque, New Mexico, where he remarried and taught at a boy’s school until 1959, receiving an M.A. degree from the University of New Mexico in 1960. After working on a Guatemalan plantation in the early 1960s, Creeley returned to the American poetry world, teaching for brief periods of time at the University of British Columbia and living in Bolinas, California before becoming a professor at the State University of New York at Buffalo, where he would remain until his death.

His early poems, Poems 1950-1965, were collected in 1966, and his Collected Poems were published in 1982 by the University of California Press. Creeley received many of the major poetry awards, including the Levinson prize, two Guggenheim fellowships, and the Shelley Memorial Award and the Robert Frost Medal from the Poetry Society of America. He was elected to the American Academy and Institute of Arts and Letters in 1987, and received a Distinguished Fulbright Fellowship to serve as the Bicentennial chair in American Studies at the University of Helsinki from 1989-1991. At the time of his death, on March 30, 2005, Creeley was attending a writing retreat in Texas.

So much of my childhood seems
to have been spent in rooms—
at least in memory, the shades

pulled down to make it darker, the
shaft of sunlight at the window’s edge.
I could hear the bees then gathering

outside in the lilacs, the birds chirping
as the sun, still high, began to drop.
It was summer, in heaven of small town,

hayfields adjacent, creak and croak
of timbers, of house, of trees, dogs,
elders talking, the lone car turning some

distant corner on Elm Street
way off across the broad lawn.
We dug caves or else found them,

down the field in the woods, We had
shacks we built after battering
at trees, to get branches, made tepee-

like enclosures, leafy, dense and in-
substantial. Memory is the cave
one finally lives in, crawls on

hands and knees to get into.
If Mother says, don’t draw
on the book pages, don’t color

that small person in the picture, then
you don’t unless compulsion, distraction
dictate and you’re floating off

on wings of fancy, of persistent seeing
of what’s been seen here too, right here,
on this abstracting page. Can I use the green,

when you’re done? What’s that supposed to be,
says someone. All the kids crowd closer
in what had been an empty room

where one was trying at least
to take a nap, stay quiet, to think
of nothing but oneself.

Posted by Douglas Messerli at 1:50 AM