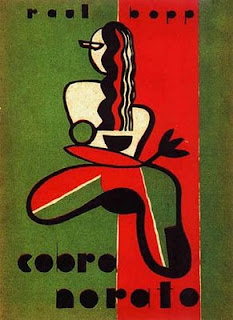 Raul Bopp (Brazil) 1898-1984
The Brazilian poet Raul Bopp was born in Pinhal, Rio Grande do Sul on August 4, 1989. He began as a journalist but moved gradually to poetry and eventually became an economist involved with a diplomatic career that led him to various parts of Brazil, elsewhere in Peru, Austria, and elsewhere, where he served as the Brazilian ambassador. From 1932 to 1941 he served as a foreign service officer in Japan, and then for the next four years in Los Angeles, where he was married.
But it was during his early years, exiled for his political views in Amazôzia, that helped him develop as a poet, and resulted in his masterwork, Cobra Norato, written in 1928 and first published in 1931. Alongside Mário de Andrade’s poetic novel Macunaíma, Cobra Norato is one of the great works of Brazilian modernism. Neo-Romantic in its structure and psychological issues, the work is similar to a fairy-tale, focusing on Indian myths and exotic rites in the Amazonian jungle region.
Bopp later wrote shorter lyrics, often satirical in their intent, published in Poesias and Antologia poética.
He also wrote numerous books of prose on America and his experiences as a foreign service officer and ambassador.
BOOKS OF POETRY
Cobra Norato (São Paulo: Irmãos Ferraz, 1931); Urucungo (Rio de Janeiro: Ariel, 1932); Poesias (Zürich: Orell Füssli, 1947); Cobra Norato e outros poems (Barcelona: Dau al Set, 1954); Antologia poética (Rio de Janeiro: Leitura, 1967); Putirum (Rio de Janeiro: Leitura, 1969); Miroga e outros poems (Rio de Janeiro: Civilização Brasileira/MEC, 1978); Poesia Completa (Rio de Janeiro: José Olympio, 1998).
For a selection from Cobra Norato, go here: https://jacket2.org/commentary/toward-poetry-americas-9-raul-bopp-cobra-norato-nheengatu-left-bank-amazon-notes-translat
[We welcome suggested corrections and commentary on all poet entries.]
Posted by Douglas Messerli at 1:44 AM

Douglas I still have that translation of Cobra Norato! Would you like to see it again? Beijos Jennifer