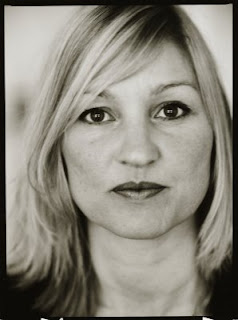 Naja Marie Aidt was born in Egedesminde, Greenland in 1963. She grew up in Greenland and, later, in the Vesterbro area of Copenhagen. In 1991 she made her literary debut with Sålænge jeg er ung (As Long as I’m Young), the first volume of a poetic trilogy which also includes Et Vanskeligt mode (A Difficult Encounter) of 1992 and Det tredje landskap (The Third Landscape) of 1994. This trilogy deals the passage from youth to adulthood and the loss of innocence and naiveté, replaced by dark forces of self-destructive fantasies and nightmares.
This kind of oppositional poetics reappeared as well in her next collection, Huset overfor (The House Across the Way), which is centered upon a dialectic between desolation and abundance. The work established her as an important Danish literary figure. Writing in Det fri Aktuelt, critic Christian Yde Frosholm wrote of this book: “Naja Marie Aidt’s The House Across the Way is an unwavering and tightly composed depiction of how a dream is dashed: the dream of family.”
Over the next few years Aidt wrote short stories and three further volumes of poetry: Fra digterens hand (From the Hand of the Poet), Rejse for en fremmed (Journey for a Stranger), and Balladen om Bianca (Bianca’s Ballad), a text sharing its pages with sometimes bizarre and eccentric photographs of the graphic artist Kim Lykee. Aidt has also written dramas for the theater and radio plays.

[We welcome suggested corrections and comments on all poets]

Posted by Douglas Messerli at 10:18 AM