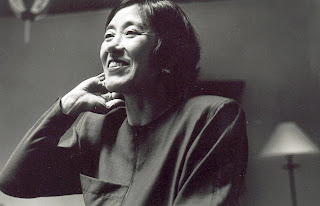 Born in Beijing, China in 1947, Mei-mei Berssenbrugge grew up in Massachusetts, and now divides her time between rural New Mexico and New York City with her husband, the artist Richard Tuttle, and their daughter.

Berssenbrugge was contributing editor of Conjunctions magazine and taught at Brown University and the Institute of American Indian Arts. Her first book, Summits Move with the Tide, was published in 1974; but it was her third title, The Heat Bird which brought her national attention. Writing in the American Poetry Association Newsletter, Brent Morris described the work as “a single long, exquisitely crafted metaphysical poem about the enigmas of love, silence, the physical world, and human error, about the paradoxical spaces between them, about the ways light speaks to shadow. …The effect is dazzling.”

In the years following Berssenbrugge continued to publish new collections, often in collaboration with artists such as her husband and Kiki Smith. She also collaborated on theater works. She has received two NEA Fellowships, two American Book awards, and an award from the Asian-American Writers Workshop and the Western States Art Foundation.

For a wide selection of audio texts of readings by Mei-mei Brusenbrugge, click below:
http://writing.upenn.edu/pennsound/x/Berssenbrugge.php

I go to her house and talk with her as she draws me or knits, so it's not one on one exactly, but tattooed stars on her feet.

I pull the knitted garment over my head to my ankles.

Even if the detail resists all significance or function, it's not useless, precisely.

I describe what could happen, what a person possibly does in a situation.

Nothing prevents what happens from according with what's probable, necessary.

The chance occurrence is remarkable, when it appears to happen by design.

Telling was engendered in my body and fell upon me, like a battle skimming across combatants, a bird hovering.

Beautiful friends stopped dressing; there was a war.

I'd weep, then suddenly feel joy and sing loud words from another language, not knowing my song's end.

I saw through the event and its light shone through me.

Before, indifference was: black nothingness, that indeterminate animal in which everything is dissolved; and white nothingness, calm surface of floating, unconnected determinations.

When ground rises to the surface, her form decomposes in this mirror in which determination and the indeterminate combine.

Did you know, finally, there was not communication between her and myself?

Communication was in time and space that were coming anyway.

I may suffer if I can't tell the agony of a poisoned rat, as if I were biting.

Bruce leaving for the night makes space for his cat to enter.

It's an exterior relation, like a conducting wire, light fragment by fragment.

I realize my seeing is influenced by him, for example, when we change form and become light reaching into corners of the room.

Even now, we're slipping into shadows of possessions that day by day absorb our energy.

I left my camera on to map unfinished work with shimmering paths of my cat (now disappeared), mice and moths (now dead).

There's space in a cat walking across the room, like pages in a flip-book.

The gaps create a reservoir in which I diffused my embarrassment at emotion for animals.

I posted frames each week, then packed them into suitcases, the white cat and her shadow, a black cat.

I named her Watteau, who imbues with the transitory friendship we saw as enduring space in a forest.

A level of meaning can be the same as a place.

Then you move to your destination or person along that plane.

Arriving doesn't occur from one point to the next.

It's the difference in potential, a throw of dice, which necessarily wins, since harm as of her handcrafted gift affirms chance.

I laugh when things coming together by chance seem planned.

You move to abandon time brackets, water you slip into, what could bring a sliding sound of the perimeter of a stone?

You retain "early" and "walking" as him in space.

When a man is disrupted by analyzing too much, elements can be used by a witch's need for disharmony.

My advice to you is, don't get lost too deep in need, unless you're going to join the witches.

Your need would be as if you were a white animal pulling yourself into a tree in winter, and your tears draw a line on the snow.