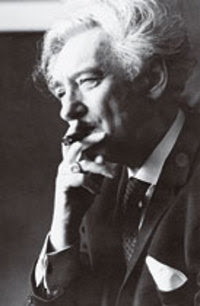 Maurice Gilliams was born in 1900 in Antwerp, Belgium, where he lived for the rest of his life until 1982. In Flanders and the Netherlands, Gilliams is considered to be one of the greatest writers of the twentieth century, even though his entire oeuvre—with only sixty-eight poems in total—is contained in just one volume, a book he entitled Vita Brevis (“short life” in Latin, but also suggesting the wish for an ars longa, a “lasting art”).

The son of a Flemish printer and a French-speaking mother from an old bourgeois family, Gilliams grew up bilingually. He decided that Dutch suited his poetic purposes best, which was to isolate fragments of a life in words, personal and detached at once, hard and true like stones. Being a poet in everything he produced, Gilliams also wrote lyrical novels (the most famous of which is Elias [1936]), essays on artists and fellow poets, and diaries. Further, Gilliams earned a living as a printer, teacher of typesetting and calligraphy, librarian for the Royal Museum of Fine arts in Antwerp, and finally, director the Flemish Academy of Dutch Language and Literature. Toward the end of his life Gilliams was awarded the most important literary prizes of the Low Countries and given the title of baron when he was eighty years old.

It is a swelling of sad water.
the ships stream through the windy night.
The city where I live flows off in years of illusion, rot and thingless blight.

A friend died. His verse I’ve been rereading.
Clawing through the open window comes silence.
From the hardened salt rim of centuries
moonlight whitens on the annals of butterflies.

—Is dream a vapor of perished souls?
It’s freezing in the old house. Its mirrors molded
into hollows of time without any sigh or lament.

Clotted gall of fish sticks to the knives.
The leftovers of the deep of midnight
attach shadows to my surrender.


—Translated from the Dutch by Marian de Vooght

I saw you working on the field.
Out of the red trees
black birds came flying.
Light sparked on your spade.
Slowly your foot forced
the spade’s white.

Suddenly you jumped up,
staggered and looked for the bottle
and drank for a long time;
but then you keel down
like a broken steel knife.

A pipe, a pen, a little chill,
a flower with no leaves on the table,
you can see the rooftops from your chair
what moves you most will make you wiser.
This is you standing by the books,
this is you climbing into the poem;
your eye looms larger
your mouth sinks, aslant in the corners,
your heart is given its own light.
Go back to the good letters
from the past, now and then,
but easy on thoughts of love
where the birds go weeping.

—Translated from the Dutch by André Lefevere

In the wooden house
the white horse dwells,
and the wooden wagon sleeps there
beside the firewood,
ponderous and dull.

When the moon melts on the flowers,
around the wooden house,
the water glistens on the heath,
in front of the house.

Passing with the wind
the train whizzed for years on end,
and the house stays forever
with the white horse
and the wooden wagon.

Creator with the trumpet.

The scene of the angels
and the cloud monsters
in a struggle toppling down,
stand completed in the tide.

You do not taste the melancholy of a thin French book,
in front of the open window and it rains sweetly
on the blue fir tree. Evening is falling,
and I read abundance from the pages
while I keep silent. —With me alone you only want,
as it was in an old song:
to ride across the heath. I remain silent,
because your voice begins to seem unusual
and your restlessness takes its revenge in a kiss:
“stay here.” But a miserable poet
does not have what it takes to buy butter,
and then words of love melt away quickly.
—I am reading about a child who blew a soap bubble
around a beetle: mad and crazy sadness.

With this biting winter around me,
the mortal silence of my icy mind
—who will, inside, blind me
and would my flesh with ire?

One shine lasts for nights, days,
stronger than my childhood every dreamed;
I have a body mad with pain
and in my head my thoughts in cruel unity.

Like a plant held in a canal frozen over,
my past stands as if petrified;
but my future will be flowing
from the lost honey of my crying.


The Bottle at Sea

The bleak profusion of the blood
brought mind and stomach no stable stock.
We are created out of pride,
out of confusions and bad luck.

I fixed my eyes till it was in vain.
This blind pearl I did retain
—here, on the island, spring blossoms
the pleasure of my hearth a monkey’s gain.

A lonely man grows fat in bed.
He bites his nails and cries, all sad.
Fleas and specters make him swear.
And he gets lost in swirling depths.

The stars move and advance
above my bold and sad existence.
My sleepless eyes discern no end,
but in me the End commences.

To marl you offer sun and rain
(your benevolence is rarely famed!)
—Breeches, or bread, a place for the night
did many a child never obtain.

A woman had to watch my attire
while I faced dream dragons in a fight.
Down I came from the blade on the grass.
There she sat sweetly lighting some fire.

Let me warm my feet, son.
Moon and wind made me all numb.
A man chews turnips his whole life
behind the roses of his passion.

The void along the stars gapes deep.
My heart is an emptier void asleep.
—Ah, mother, do not call me into being:
in grieving it is grief that you will reap.

The stone angel on the Cathedral elevates
his scales at midnight for those who collapse.
the army of lice is crackling. Pissing cats
in draftless winding alleys.

Flattened on the knolls of silence,
full-fledged under a rind of sleep, curdled
the laryngeal blood, the skull plucked
bald, the smelly Cocks of torment lie.

Here the rosary’s beads are futile;
no mystery remains of flesh and bones
where in emptiness emptiness resides.

The town of streets and the house of rooms:
woe, leave the clock alone. Drink wine, count gold.
The dirt rots underground. Don’t pray for skeletons.


—Translated from the Dutch by Marian de Vooght

Those lofty words the break our hearts,
are written in the flowing water.
—A stone rests on the riverbed.
It didn’t ask for the weeds’ caresses.