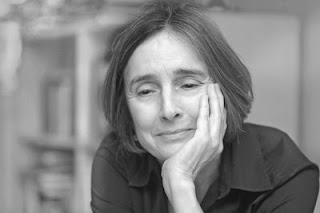 Born in Cleveland, Martha Ronk graduated with a B.A. from Wellesley College in 1962, and a Ph.D. from Yale, writing her dissertation on Paradise Lost. From 1967-1971, she taught at Tufts University, and then at Immaculate Heart College in Los Angeles; she began teaching at Occidental College in 1980, where she became the Irma and Jay Price Professor of English and Comparative Literary Studies.

She has written critical work of Shakespeare and contemporary figures. She began publishing her work poetry in the 1980s, with her first book, Desire in L.A. appearing from the University of Georgia Press in 1990. Others, such as Desert Geometries, State of Mind, Emblems, Allegories, and Eyetrouble, appeared throughout the 1990s. She also published a memoir focused on various food, Displeasures of the Table (Green Integer, 2001). Why/Why Not, published by the University of California Press, appeared to great literary acclaim in 2003, and her 2004 book, In a landscape of having to repeat, won the PEN West 2005 Award for the best book of poetry. Her 2007 book, Vertigo, won the National Poetry Award. Most recently, Ronk has published a collection of short stories, Glass Grapes: And Other Stories (BOA).

She has been a poetry editor of Littoral Books and the journal The New Review of Literature. With Paul Vangelisti, she edited Place as Purpose: Poetry from the Western States in 2002. Ronk has had residences at The MacDowell Colony and at the Djerassi Foundation.


[You may purchase a copy of Ronk's Displeasures of the Table by clicking here.]

The Moon over L.A.

The moon moreover spills onto
the paving stone once under foot.
Plants it there one in front.
She is no more than any other except her shoulders forever.
Keep riding she says vacant as the face of.
Pull over and give us a kiss.
When it hangs over the interchange
she and she and she. A monument to going nowhere,
a piece of work unmade by man. On moon
rise up and give us ourselves awash and wear—
we've seen it all and don't mind.


“Often, probably because I was so tired, the rain seemed more than rain”


Then all the pools were like nickels
until dark when the ashes
collapsed. Each time I lit up my face.
the downpour from the Keys and ruined trailers,
a roof flying across the headlines. Listen
to the unaware: water and wood.
She’s waiting for it to leave.
He calls it by its common name, devil in the mist.
It would startle itself if it could
with its repeated blue, its wired-on extensions
its hallucination in the rain.
In the night the copper flashing holds,
the tea makes my mouth open and close
mechanical as any memory.

Posted by Douglas Messerli at 11:01 AM