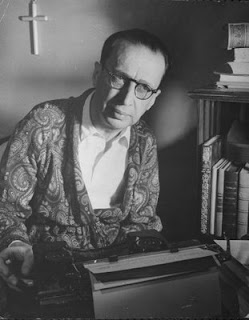 Born in Recife in 1886, Manuel Banderia moved to Rio de Janeiro at the age of ten, where he attended the Colegio Pedro II, studying with two of Brazil's major critics, José Veríssimo and João Ribeiro. He later entered the Polytechnical School in São Paolo, but tuberculosis forced him to leave his architectural studies. In 1913 he traveled to a Swiss sanatorium near Davos-Platz, where he met the French poet Paul Éluard.
In 1914 he returned to Brazil, where he wrote music criticism and columns for various newspapers. In 1917 he published his first collection of poetry, A cinza das horas (The Ashes of the Hours), poetry influenced in style by the Parnassian symbolists. In his second book, Carnaval (1919), he experimented with meter, this work drawing the attention the Brazilian modernists such as Mário de Andrade. Two later collections, he solidified his position as a poet of the modernist revolution, even though Banderia strongly denied any affiliation with that group.
In the 1930s Banderia's health improved, and he found employment as an inspector of secondary schools; in 1938 he began teaching literature at the Colegio Pedro II, and later he joined the first faculty at the University of Brazil as Professor of Spanish American Literature. He was elected to the Brazilian Academy of Letters in 1940.
After his retirement in 1956, Banderia again traveled to Europe, visiting England, Holland, and France, where he was received as the major poet of Brazil. His last edition of collected poems, containing much of his outstanding prose work as well, was published in 1967.

[We welcome suggested corrections and commentary on all author entires]
Posted by Douglas Messerli at 10:33 AM