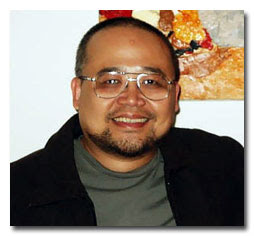 Linh Dinh was born in Saigon, Vietnam in 1963, and came to the US in 1975. He is currently living in Norwich, England, where he is the David Wong fellow at the University of East Anglia.
Dinh is the author of two collections stories, Fake House (Seven Stories Press, 2000), and Blood and Soap (Seven Stories Press, 2004), and three books of poetry, All Around What Empties Out, American Tatts, and Borderless Bodies. His work has been anthologized in Best American Poetry 2000 and 2004, and in Great American Prose Poems from Poe to the Present. He is also the editor the anthologies Night, Again: Contemporary Fiction From Vietnam (Seven Stories Press, 1996), Three Vietnamese Poets (Tinfish, 2001) and is the translator of Night, Fish and Charlie Parker: The Poetry of Phan Nhien Hao (Tupelo, 2006).

To sit on one's heels,
With the knees bent
And the weight resting
On the balls of the feet.

To crouch or cower
Close to the ground,
As an animal.

To occupy illegally
And empty, abandoned,
Or condemned building.

Orientals do it.
Occidentals don't.

Baseball catchers and sumo wrestlers also do it.
And a young blonde hiding two cars
After too many brews on tap,
Her white orbs like twin moons
Inches from the steaming asphalt,
Piddling.

After death I will finally be able to squat
Over my own brown face.