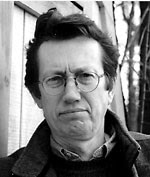 Latta lived in Paris circa 1973-74, and 1979-80, thanks, in the latter case, to an NEA Creative Writing fellowship. He worked at Ithaca House (and the formerly poet-requisite “succession of stupid jobs,” janitorial to editorial) during most of the 1980s. Latta attended the University of Virginia (1987-1989, M.F.A.) and SUNY at Albany (1991-1995, Ph.D.) He married Joanne Tangorra in 1991; a son, Giancarlo, was born in 1995. Since 1997 Latta has worked in Hatcher Graduate Library at the University of Michigan, in a variety of positions. Currently, he selects and edits texts for the Early English Books Online project, part of the Digital Library.

Latta’s first collection, Rubbing Torsos, was published by Ithaca House in 1979. His second collection, titled Rue Hazard, was a finalist twice—in 1992 and 1994—in the National Poetry Series competition, and remains unpublished. A third collection, Breeze, won the Ernest Sandeen Prize in Poetry (selected by John Matthias) and was published in 2003 by the University of Notre Dame Press. Other poems from his forthcoming Some Alphabets appear in The Poker, Jacket, New American Writing, 1913, Boston Review, Wherever We Put Our Hats, No, Fence, Free Verse, Typo, LIT, American Letters & Commentary, Bird Dog, Xantippe, and elsewhere.
Latta occasionally writes reviews, reading notes, assorted jibes and juvenilia at a blog titled Isola di Rifiuti (http://isola-di-rifiuti.blogspot.com) Rue Hazard(http://ruehazard.blogspot/com) and (http://hotelpoint.blogspot/com).

Empahtic's the rasp of I
In the star-eye'd crosshairs
Of my cant and holy
Gibberish, zinnia'd out to th'azimuth
Where th'empty disjointure between being
And meaning, that inconquerable lag
Pettiness betweixt fallow hope &
Torn arrival's what I will
Call God. O such thin
Narrative'll ruin the illimitable name!
So the hectic of a
Madness's fury. The Trencher'd bread
Goeth blacke as incke! I
Say set simpering criminal fires
To the 'carking anxious houses'
Of the fuggin' ambitious yessers!