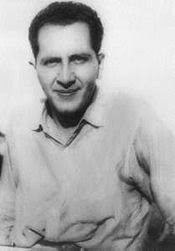 Born in Granada, Nicaragua in 1914, Joaquín Pasos was a popular poet of Nicaragua until his early death, at the age of 32, in 1947, just after he completed his great symphonic epic, The War Song of Things.
Pasos spent most of his life in Granada, the colonial center of the country. The son of a well-to-do family, he wrote songs of birth and death which connected more with the Indian culture than to his own privileged upbringing. He also wrote the popular poems of a “Young Man,” including various sub-topics such as “Poems of a Young Man Who’s Never Travelled” “Poems of a Young Man Who’s Never Loved” and “Poems of a Young Man Who Does Not Speak English. The first grouping concerns places to which he’d never traveled, such as Norway, a poem about which he wrote in English, although he claimed to have no knowledge of the language.

Pasos, whose cousin was the poet Pablo Antonio Cuadra, was influenced, quite obviously by the “vanguard” poets of South America—in particular Borges and Huidobro, as well as the Mexican experimentalists of the Estridentistas and Contemporaneos groups. Yet his work, which was collected in Poesía of 1960 and in Poemas de un joven in 1986, forged its own poetic territory. Beloved in his native homeland, he is basically unknown to English-language readers.

Green Integer plans a collection of his poetry.

All morning I’ve been on the bridge
and the fish carts have gone by.
A small factory shot through with windows
flings out a red diabolo each minute–streetcars.

Oh! This is Norway
possessed of metal trees
and young ladies brought up in refrigerators.
Here a bird turns like a windmill
and the horses are tamer than in Holland.
The fjords rise like old theater curtains.
Every six months the sun goes down.

All morning I was on the bridge
and the fish carts went by.
One of them dropped a dead codfish
and the streetcar guillotine sliced it in two.

Oh! This is Norway
green and white,
white and green like an obscene old man.

-Translated from the Spanish by Yolanda Blanco and Chris Brandt

But I have a soul as tender as marshmallows,
and my eyes flash on and off like the intermittent neon signs.
That’s why I love this hotel, this little rest, a locket of serenity.

Across the street, a sad sidewalk and a public clock drawn my eye each year,
and thereupon I invent a tenderness old and ripe.
In the Tremol Hotel, no one know me yet,
in spite of my familiarity with its doors and its swallows.
No one, maybe not even aviators,
can treasure as I do
these post-card memories.

A doll factory is an enormous house with huge glass windows
in whose panes the german landscape resolves like a dream at 10 am.
In the public buildings bronze eagles open up a peasant sky
like a paper backdrop above large-footed men with professorial mein.
Nonetheless in Unter den Linden, in the shade of lime trees
[their females walk, women with apple faces.
A breeze of raw silk peddles illustrated magazines and settles
[on the benches of the great stations that recall dirigibles at rest.
The serious outdoor clocks of the department stores run for Wilhelm, Franz, Fritz,
[and Hans,
and fill the lives of these good cheese boys with some kind of liebkosen,*
until in time they acquire large bellies with gold chains
and impressive Kaiser-type moustaches beneath red noses.
German simplicity overflows in the heads of bock and shows off its
[bourgeois goodness in the fresh ripe smiles of the Herren.
But no. We are a strong people, a military race with pointed steel helmets
and we are marching toward das Kolasal**
with the young flesh of Berlin
and Bismarck’s steel statue.

*literally, carress; stroking, comfort.
**the colossal, with the accent on the last syllable

Didn’t I tell you, pick up
your feet Elise, for time flies?
-Fray Luis de Leon

Long Beach, Alhambra, South Pasadena,
flower and sun
how cool the air, the wind,
the sun,
life is aromatic
the smiles, the automobiles,
the sun:
behind the window grates there’s always
a flower growing,
a little nun, 20 years old
the Sister
sun of Long Beach
Alhambra, flower and sun
in South Pasadena, the wind
is made of flower and sun
life is strong
daytimes
in the South,
it’s easy in the Northern
nighttimes to let life go
and forget it like a used match,
but life is strong
daytimes
in the South
it’s a new car in love with a flower
still, little nun of 20 years
you were not betrothed to the sun
you didn’t step in to the Tourist Agencies
you never knew Captain Cook
your lips flowered into no smile
your hear to no love
your flower to no flower.
Long Beach, Alhambra, South Pasadena,
life is cool, the air,
the Sun.
The South.
The Nun.

*Pasos is playing with the similarities among the words bordar (to embroider), bordear (to tack), and borde (edge, brink) and with the continuing series of “b” sounds in a string on nonsense words.


–Translated from the Spanish by Yolanda Blanco and Chris Brandt

A great idleness, Sesquipedalia Verga.
A lecture.
A lesson in grammar.
A duck.
A lame and baseless hatred
drops in like a bicycle
and crashes against the wall like the painting of a storm.
No. I want to go on conversing,
I want to live on the roofs,
with the cicada family.

In the solitude of the long dormitories like the holds of ships
[sailing the sky,
or the sad shed roofs, a homemade paraplegia of the thatch brain,
there where words resound and verbs are conjugated in emptiness,
there a grief was born in a brick.

All the living who died here,
all the dead who were born here,
left of their irascible grief traces like the sun’s of its rays.
Let the doors and windows open for them, mouths and eyes of the wall!

Don Dionisio, don Sotero, don Juan,
I’m a Nicaraguan too
but I’ll be in the stations on time for the big express trains
[from the heavyweight towns.
and in the broad passageways of the transatlantic arks I will
[recall
the balcony railings, painted a soft green, of the little white hotels.

To sail ever south
following the ocean currents,
the fugitive winds,
the tempests that how at the shores,
the waves that chew at the rocks.
I’m going to hunt stars with a rifle,
run with my eyes, see with my hands.
The moon comes out with me and hangs itself in a tree
and the sun follows me, licking my feet.

That woman who’s waiting for me seated on a sleeping stone
is the isotherm of my breast, that oscillates like a flock of compass needles.
Out of the time of the blue thread comes a tear by wire
and a sweet little gamine smiles at me like a lemon candy.
My curlew’s sidelong song tips its hat to me
while cinder-covered Concha puts her doll the broom to sleep in a corner
They are so much alike, the broom and the little rice-bird!*


*The Nicaraguan arrocero is a type of bird that lives around rice plantations, very playful and mischievous, that gleans fallen grains of rice.

Sweet Monstrous beings like the automobile moan for you.
Homogenous things, even things purified like carbon, moan for you.
Everything from the first stone your schoolmate threw to the last stone
[that will be hurled against you—oh adulterer to be!—
moans for you.
Because of the slimmest and most sufficient reason for your existence
like your fifteen-year-old leg,
because you learned to speak and things are still amazed to hear themselves
[repeated in your mouth
because your breast is a little universe in which we can adore God’s roundness.


–Translated from the Spanish by Yolanda Blanco and Chris Brandt

The Infanta as a Prisoner
for Charles Chaplin


Your face is imprisoned, poor Ardenolilla*—we can’t say we didn’t know
Three days in prison, three times your head will bow.
Teresa, they will pull three tears out of you.

With filth you have painted sorrow on your face,
you put your cherry foot through the iron bars,
your naked foot, another of your prison coquetries.

Ah! This strict jail cries out night and day,
a handful of tears makes a river flowing along your name
carved into the table top, Teresa.

Teresa, Teresa, the first river ever to rise on earth is on the table.
We are about to lose our head.
But we will find your naked foot. Prisoner Ardenolilla.

Trees reached their branches in through the fat window
to bring you birds and after-dinner fruit.
If you laugh, nature dies laughing, too.

Because your joy is a joy that prays,
it is the pure belly laugh of a lewd virgin.
But now you are a prisoner and you’ve painted sorrow on your face.
that’s the way the beggars love you who came to see you and
[left the bouquet of tears on the table,
the ones who love you from the very bottom of their miseries,
the ones who hope you die so they can write this trifle on your headstone:
“The princess who wanted to be princess of the beggars.”


*The meaning of this name to J.P. is unclear to us, but is obviously some sort of word play. Literally, it might mean “Little Fiery One,” or it might be the kind of nickname given to a princess.

“Norway,” “Tremol Hotel,” “German Dream Number 5,” “Sister South,” “Seafruit,” “Piano,” “Sweet Monstrous Beings,” “The Infanta as a Prisoner,” and “Song Songs to Woman Woman”
are published in translation by Yolanda Blanco and Chris Brandt. Copyright ©2006 by Yolanda Blanco and Chris Brandt. Reprinted by permission of Green Integer.
Posted by Douglas Messerli at 8:31 AM

Thanks you for sharing and may you have many thought provoking conversations!