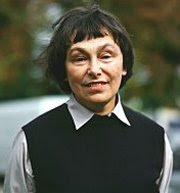 Known primarily as a novelist, Ilse Aichinger is a major representative of the first generation after World War II in German literature. Half-Jewish, Aichinger served in forced labor during World War II and was not allowed to graduate from the University of Vienna until after the war. After finishing several semesters, she left the University to become a reader for the German publishing house, S. Fischer Verlag.

Her first major contribution was to the postwar Austrian journal, Plan. “Aufruf zum Mißtrauen” (“Call to Mistrust”) was a major statement of mistrust of the postwar period in Austria. She emerged as a major figure, however, with her novel, Die größere Hoffnun (Herod’s Children) in 1948. Its use of dream and verisimilitude to create an atmosphere of fear of distrust is reminiscent, in some ways, of the works of Kafka.

In 1953 she published her collection of stories Der Gefesselte, translated as The Bound Man and Other Stories. The same year she married the German poet Günter Eich [see PIP volume 1], moving with him to Bavaria. In the 1963 she published her first poetry in a book that combined poetry, stories, and dialogues. Her major book of poetry, Verschenkter Rat was published in 1978. She has also published a number of radio plays.

Aichinger was the recipient of the Georg Trakl Prize in 1979, the Franz Kafka Prize in 1983, and the Großen Österreichischen Staatspreis für Literature in 1995. In 2017 Aichinger was chosen by the American Award for Poetry for their award for an international contribution to the art.


[We welcome suggested corrections and comments on all poets]
Posted by greenintegerblog at 10:02 AM