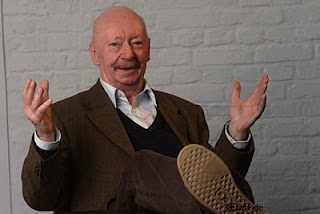 Born in Berlin on March 6th, 1929, Günter Kunert studied at the Academy of Applied Arts in Berlin from 1946-1949, and married Marianne Todten in 1951.
Kunert has written in nearly every literary genre, including literary criticism, short stories, television plays, and poetry. But it is as a poet that he is best known today, particularly for his parable-like writings and his aphoristic and dark wit in the manner of Bertolt Brecht. Kunert’s work of the 1950s grew out of his experiences with war and facism, and in his early writings his poems often served almost as “warning poems” about the dangers of repeating war and military dictatorship. In the 1960s this work changed from warning of the dangers to a sense of general disillusionment, influenced particularly by his disgust with East German socialism. From 1963 on he began to receive criticism from the GDR, and he 1966 his poetry was attacked from displaying un-Marxist qualities, leading to his expulsion from the Communist part in 1977. In 1979 he left East Germany to live in the West.
Kunert has received numerous literary awards, including the Heinrich Mann Prize in 1962 and the Becher Prize in 1973, and the America Awards of 2009 for "a lifelong contribution to international writing."

Still no light in the sky. Smoke
In the air. Outside on the gravel
A figure.
Unrecognizable. Wrapped in mist
And twilight.
Knocks at the black, cracked wood
Of your door.
And if you ask the name of whoever it is
Rapping on your house, a voice will say:

The one you drove out of your life
Like useless ballast.
The one you poured away
Like old dishwater.
Whom you allowed to go dry
Like the lilac in the heat
Of noonday.
Who is always dying. Always returning.

I am called truth.
Nothing stops me: not the wood
Of your door. Not the door of your room.
Not the skin of your flesh. Not
the bone roof over your brain.
I am coming in.

The Shrieking of Bats

While they whiz through the air in the twilight, hither and thither, they shriek out loud, but their shrieks are heard only by their own kind. Treetops and barns, decrepit steeples throw back an echo which they hear in their flight and which tells them what obstacles are looming in front and when the way is open. If you deprive them of their voices, they cannot find the way anymore; everywhere colliding with things and flying against walls, they fall dead to the ground. Without them there is an overwhelming increase of what they normally destroy: vermin.

When I woke
I woke in the breathless black
Of the box.
I heard: the earth
Was opening over me. Clods
Fluttered back
To the shovel. The
Dear box, with me the dear
Departed, gently rose.
The lid fellow up and I
Stood, feeling:
Three bullets travel
Out of my chest
Into the rifles of soldiers, who
Marched off, gasping
Out of the air a song
With calm firm steps
Backwards.

In summer under a cloudy sky
in summer with a mild rain falling
in summer in the coolness of old rooms
in among old wallpapers freighted with visions:
to lie there
and listen to the trams
clunk of wheels over gaps in the rails
gallop of cabs
staccato of hand-driven machines
in blown-away back yards
mortal play of vanished bodies
pale in the pallor of secret beds
hidden behind crumbling stucco
behind the teeming scurf of old houses
which one sudden afternoon unwreathed
are carried away by dump trucks and cranes
complete with their contents
out of their existence into our memory
where their transcience welcomed and wept for
stops: in summer
with a mild rain falling.

Speculations about the Writing of Poems
by the Writer of Poems

1
Lest by some mishap
the eternal fire of our transience
blind professional readers’ eyes, poets plug
the unusable hulks of their works
with cultural putty, kneaded into
tough lumps of enigmatic décor:
purloined trouvailles
from all the literary wastelands.


2
Lest
reality trickle through, reddish and
lymphatic mainly, malodorous, poems are
of artificial stuff
and more hermetic than bunker doors underground,
open only for ruin, Pandora’s hoard,
and more impenetrable
than spy networks, the webs
of pensionable spiders, bug officialdom, glamorized
worms that seethe
under the broken paving of law.

3
Better
to let the seed spill on the earth and the tone
crumble or fade: silence
would be
a measurable frequency of undeclared
clear and loud truth.

4
But the never enough is better:
of plain material, short in measure, vessel
for a small flame, illuminating
little of its world, yet little is more than nothing.
To say the right thing is more
than correctness.
To disturb for the good
infinity of a second those
perpetual busybodies laboring
at their own hubris.
To know of the future, that dark mountain,
that a door to the treasure opens, if

one speaks the magic word: to speak this
one word with all the others
is better than every best thing.

Translation of a German Proverb into Historical Kinetics

Before you enter, clean your tongue!
The landlord suffers from sensitive ears,
unlike his lodgers, the obligatory ones,
whose trouble is feeling (or whatever they call it).

Don’t mention rope makers, or sisal,
no hemp taboo, whose days are gone,
whose days perish—nevertheless you are asked
and tempestuously told:
Not to speak of it, one just doesn’t speak
of it,
don’t do it, because one simply doesn’t, therefore:
one may be one: ideal, to all attainable.

But those who have not held their tongues enough
are hung
from that which is unspoken by the unspeakable one.

It is nearly autumn
when nightfall guarantees
her appearance. The old time traveler
from the beginning of the world,
insubstantial. She leaves
her face in the lamp shadow
or has none. She trades
in a drug that makes me
avoid the reality
I am not in. Sometimes
she even announces her presence
by the rustling of wallpaper,
by a sigh
the sleeping cat heaves,
by, suddenly perceptible,
a heartbeat
that leaves me wondering
where it came from.


From the Background of a Breughel

The ancient house
in the pictures of distance,
forever surrounding:

so the heavens talk to it,
trees and bushes
long ago came and keep
company with it—
the wild grape vine
belts and circles
rooms of sleep,
dark stripes of staircase
the kitchen midpoint
lit by a log and eyes
of cats

Not even crows
ruffle your flesh,
here it is, no longer
waiting, it is your blood
feeds the beams and the tiles,
the rain has wet your skin
for centuries, or only
as long as you are looking

(from Abtötungsverfahren, 1980)
Posted by Douglas Messerli at 7:29 AM