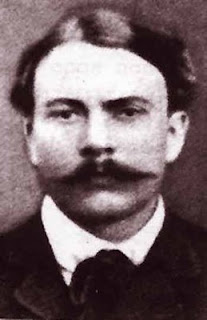 Often compared with Arthur Rimbaud, Dino Campana is generally represented as the “wild man” of Italian poetry. His Orphic Songs, written in 1914, represent a “romanticized” and idealized vision that lashed out against the bourgeoisie and contemporary attitudes of the Italians.
Born in Marradi, a mountain village in the Apennines, Campana spent a happy childhood, although his parents were often severe disciplinarians. His father was an elementary school principal, an insistent patriot and ardent member of the conservative community. His mother, Fanny Luti, was basically eccentric, and kept her distance from her neighbors often giving herself over to religious meditations. The conflict between sexual desire and his father’s moral prohibitions and his mother’s physical and mental abstractness ultimately led to the young Dino’s resentment and outrage. He was sent to a mental asylum for medical treatment.
Having recovered, he prepared for the university, studying Greek and Latin, and becoming fluent also in German, English and French. Under the influence of a local pharmacist, he entered as a chemistry student at the University of Bologna. But his troubled mental condition kept him apart from his fellow students, and he used his laboratory almost as an alchemist. During this period he acquired great knowledge of German metaphysics, French and Spanish poetry, and the doctrines of Orphic mysteries.
At 22 he began to travel, sailing for South America, where in Argentina he worked in various jobs as a gaucho, miner, fireman and policeman, as well as playing the piano in a nightclub. Unable to financially pay his way home, he stowed away on a freighter, which at mid-voyage he found was heading for Odessa. In Odessa he joined a Gypsy tribe that worked the local fairs. Finally, he shipped to Genoa, traveling through Antwerp, Rotterdam, Paris and Basel before returning home.
Back in Marradi, he continued his hobo-like life, hiking through various mountain passes, before he finally returned to the university at Bologna and then the Institute in Florence where he received his degree in poetry.
In the autumn of 1914 he wrote Orphic Songs, completing the work in just a few weeks. Seeking the publishing houses of Florence, he hiked from Marradi to that city, and for a period of time inhabited the local café society, where he met the Futurist painter Soffici and the writer and editor Giovanni Papini. Upon meeting Papini, editor of La Voce, he handed the man his manuscript with the hope of publication or, at least, references. After several weeks he heard nothing, and when Papini left the editorship, Campana pleaded with him for a hearing; his letter was never answered. He also appealed to Soffici for return of his manuscript, explaining that it had been his only copy; Soffici’s answer was devastating, the manuscript had been lost when he moved to a new quarters. On the edge of a nervous collapse, Campana furiously rewrote the Orphic Songs from memory and self-published it at the local printshop in Marradi above the pharmacist’s shop.
Observing the book in a Florence bookstore, Soffici bought a copy and read it, impressed by its deep and dark images. He sent a letter to praise to Campana, who also had received a review by the poet-critic Emilo Ceechi. These events led Campana to return to Florence, where he remained on the outside of the literary circles, selling copies of the book to survive. Whenever anyone would doubt the value of his book, Campana would bring out the letter from Soffici and the review from Ceechi, reading it aloud. Journalists, observing his grandiose and often absurd behavior began rumors of his madness. The loneliness and abandonment Campana felt during this period ultimately did lead to his unstableness, and when he was called up by the army for duty, he was declared mentally unbalanced, and was classified as hopelessly insane and was put away at the Castel Pulci, a psychiatric hospital, where he remained, carrying on a correspondence with Soffici, Cecchi, and others for the rest of his life. He is buried at the church of Badia a Settimo, which was bombed by the Nazis during World War II.