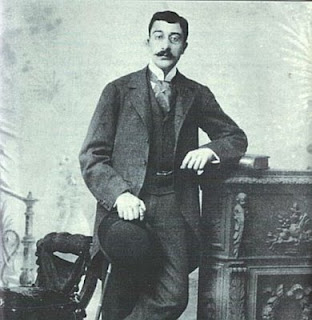 Constantine P. Cavafy (Kavafis), born in Alexandria, Egypt in 1863, was the last of nine children of a family originally from Constantinople. The father had left that city as a young man to join his elder brother in England, where the two were involved with Greek manufacturing companies. In 1850, the father became a British citizen. But before Constantine’s birth, the family moved to Alexandria, where the father died in 1970. The mother returned with her children to England, and the elder brothers ran the company business in Liverpool and London. The company failed in 1879, and the family returned to Alexandria.

The years in England, however, were important ones with regard to Constantine’s writing. In England he became well versed in the language and literature, and developed the English mannerisms and (so it is said) the accent that was to remain with him throughout his life.

In Alexandria he enrolled in the Hermis Lyceum, a commercial school, and while at school, began an historical dictionary, which was interrupted by the family’s move to Constantinople. In these years of poverty, Constantine began writing poetry and had his first homosexual affair. For a while he gave some thought to a career in politics or journalism. Upon his return to Alexandria in 1885, he began working for the stock exchange and devoted his writing talents to articles demanding the British return the Elgin Marbles. The University of Michigan Press publish Cavafy's Selected Prose Works in 2010.

At 29 years old, Cavafy began as a special clerk in the Irrigation Service, an appointment he was to hold for 30 years. He retired in 1922 with the rank of Assistant Director. He remained in Alexandria, dying of cancer in 1933.

I am a greek teacher fond of poetry and I am amazed with your blog.
I run a blog of modern greek poetry where I translate less known poets of the 20th century and contemporary Greeks as Argyris Chionis and Giorgis Pavlopoulos.
I would like you to have a look at my blog:
http://hellenicpsycheandpoeticeros.blogspot.gr/
It might intersest you.
Thank you in advance

Have translated already in english in http://hellenicpsycheandpoeticeros.blogspot.gr/
more than 130 modern greek poems