Charles Bernstein was born April 4, 1950 in New York City. He attended the Bronx High School of Science and Harvard College, from which he graduated in 1972. He is married to the painter, Susan Bee, and has two children: Emma, who died in 2008, and Felix.

From the early 70s to the late 80s, he worked as a writer/editor on healthcare and medical topics, with a break to serve as Associate Director of the CETA Artists Project (the largest postwar American public employment program for artists). 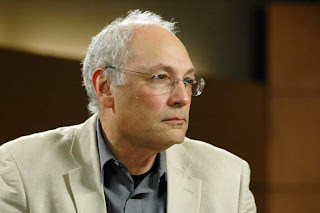 He is also the co-author of A Conversation with David Antin (New York: Granary Books, 2002). Bernstein is editor of 99 Poets/1999: An International Poetics Symposium, a special issue of boundary 2; Close Listening: Poetry and the Performed Word (Oxford University Press, 1998), The Politics of Poetic Form: Poetry and Public Policy (New York: Roof Books, 1990), Pitch of Poetry (The University of Chicago Press, 2016), and Live at the Ear (Pittsburgh: Elemenope Productions, 1994), an audio poetry anthology. He has been host and co-producer of LINEbreak, Close Listening, and Studio 111, three radio poetry series. With Bruce Andrews, he edited L=A=N=G=U=A=G=E, which has been anthologized as The L=A=N=G=U=A=G=E Book (Carbondale: Southern Illinois University Press, 1984). With Phillip Foss, Bernstein edited Patterns / Contexts / Time (Tyuonyi, 1990). Bernstein has also edited two other collections of poetry: "Language Sampler" in Paris Review, No. 86 (1982) and 43 Poets (1984) in Boundary 2 (1986). More recently, Bernstein published another collection of critical essays, Attack of the Difficult Poems (2011), Recalculating (2013), Pitch of Poetry (2016), and Topsy-Turvy (2021).

He is the Editor, and co-founder, of The Electronic Poetry Center (epc.buffalo.edu) and co-editor, with Al Filreis, of PennSound. He is coeditor, with Hank Lazer, of Modern and Contemporary Poetics, a book series from the University of Alabama Press (1998 - ), has served the Executive Committee of the Poetry Division of MLA, and serves on the board of the Richard Foreman’s Ontological Hysteric Theater, boundary 2, Chain, Sibila ((São Paolo), the Arizona Quarterly Review (Tucson), and the executive committee of the MLA Discussion Group for the Bibliography and Textual Studies.

Bernstein has written five librettos: Blind Witness News, The Subject: A Psychiatric Opera and The Lenny Paschen Show, with composer Ben Yarmolinsky, and Cafe Buffe, now being composed by Dean Drummond. Shadowtime, on the work of Walter Benjamin, was written for composer Brian Ferneyhough and premiered in May 2004 at the Munich Biennale; in 2004 it played at the Fesitival d'Automne in Paris and in 2005 at the Lincoln Center Festival. A CD is forthcoming, and the libretto was published in book form by Green Integer in 2005.

He has collaborated with Richard Tuttle on a poem/sculpture and an essay/poem on Tuttle’s work, and collaborated with Susan Bee on several artists books. In 2002, he curated Poetry Plastique, with Jay Sanders, at the Marianne Boesky gallery and co-edited the catalog.

He has given over 250 featured readings and over 200 lectures/talks over the past 30 years, throughout the world, including France, Finland, Denmark, Italy, Portugal, The Czech Republic, Germany, Austria, Serbia, Spain, Canada, Cuba, Brazil, England, New Zealand, and the U.S.

In 2002, Bernstein was appointed State University of New York Distinguished Professor, the University’s highest rank. At Penn, he received the Dean's Award for Innovation in Teaching in 2005.

Prizes include: The 1999 Roy Harvey Pearce / Archive for New Poetry Prize of the University of California, San Diego (established in 1995, the Pearce Prize is awarded biennially to an American poet-scholar in recognition of his or her distinguished lifetime contributions to poetry and literary scholarship). Fellowships include: New York Foundation for the Arts Poetry Fellowship in 1995 and 1990, University of Auckland Foundation Fellowship (1986), the John Simon Guggenheim Memorial Fellowship (1985), the National Endowment for the Arts Creative Writing Fellowship (1980), and the William Lyon McKenzie King Fellowship (at Simon Fraser University) (1973). In 2015 Bernstein was awarded both the German Münster Prize for International Poetry and the Hungarian-based Janus Pannonius Grand Prize for Poetry.


The Duck Hunters
for Ernesto Livon-Grossman
"I remember beautiful rivers
but not the boat to take you there."
The shots ring across Plaza de Mayo
16 June 1955. Even
the duck hunters shudder at blood-splattered
column of Cristoforo Colombo,
rising up upon the shoulders of those
now. "Those who use violence against their
enemies will, turning, use violence
against themselves, even their own people."
Dulce de leche but memory
slashes. Go back, daylight too hard to bear,
night soaks in despair. No moment exists
save this one, doubling over heave & mar
& spill, in still more furious repair.

____
On June 16, 1955, Argentine navy planes bombed the government and cultural center of Buenos Aires in an attempt to kill the elected president, Juan Peron. The Pope had excommunicated Peron on the same day. After 300 unarmed civilians died in the attack, a crowd torched the nearby Buenos Aires cathedral. The epigraph is from a comment by María Elena Qués. The quotation adapts a line from Judith Malina's 1967 translation of Brecht's 1948 version of Hölderlin's 1804 translation of Sophocles's Antigone.