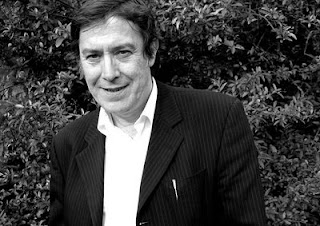 Alan Halsey was born and brought up in London and has a London University degree in philosophy. After a spell of country living in Devon in the 1970s, he ran The Poetry Bookshop in Hay-on-Wye from 1979 until 1996. He moved to Sheffield in 1997 and married Geraldine Monk in 1998. He continues to work as a specialist bookseller and has been the publisher of West House Books since 1994. With Geraldine Monk and David Kennedy he founded the Sheffield Poetry International reading series in 2005. He also works as a visual artist.
His first book, Yearspace, was published by Galloping Dog Press in 1979 and at about the same time he began his long association with Glenn Storhaug’s Five Seasons Press. Early experiments with cross-genre work led to a large-scale collage The Text of Shelley’s Death (Five Seasons, 1995) and the prose-poem/essay A Robin Hood Book (West House, 1996). Since the mid-90s he has been engaged in a number of collaborative works, including Fit to Print with Karen Mac Cormack (Coach House, 1998) and Days of ’49 with Galvin Selerie (West House, 1999). Much of his recent work has been text-graphic: Dante’s Barber Shop, a “film treatment” of De Vulgari Eloquentia, appeared from West House in 2001, and Memory Screen was exhibited at the Bury Text Festival in 2005. He provided graphic interventions for Tony Baker’s translation of Blaise Cendrars’ Prose of the Trans-siberian and contributed the graphics to Kelvin Corcoran’s Your Thinking Tracts or Nations.
He has written short studies of David Jones, Clark Coolidge, Bill Griffiths and Thomas Lovell Beddoes. His edition of Death’s Jest-Book (West House & Beddoes Society, 2003) is the first single-volume publication of the later version of Beddoes’ masterwork. With Geraldine Monk he made a recording of Beddoes’ Poems & Songs for the Beddoes Society in 2000.

Ars Poetica:
Empsonics including a remark by George Saintsbury