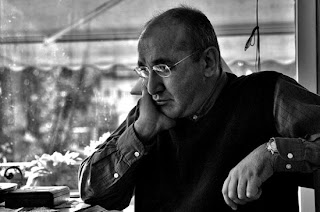 Born on March 13, 1962 in Bartin, a town in the Black Sea region of Turkey, Seyhan Erözçelik studied psychology at Boğaziçi University and oriental languages at Istanbul University. In 1986 he co-founded the Șiir Ati (Poetry Horse) publishing house which published over forty titles in the 1980s. He is a member of the Turkish Pen Center and Writer's Syndicate of Turkey. He lived in Istanbul.

Many of Erözçelik's poems are written in the Bartin dialect, but others appear in different Turkic languages. The poet has also made a modernist use of classical Ottoman rhyme, aruz, particularly in his book Kara Yazili Meşkler (Tunes Written on the Snow, 2003). He has published a critical essay on the modern mysical poet Âsaf Hâlet Çelebi and the forgotten poet Halit Asim, as well as translating the poetry of Osip Mandelstam and C. P. Cavafy into Turkish.
Erözçelik was awarded the Yunus Nadi Prize in 1991, the Behçet Necatigil Poetry Prize in 2004 and the Dionysos Prize in 2005.


To read another poem published on Words without Borders, click here:
http://wordswithoutborders.org/contributor/seyhan-erzelik/

For three poems in the original Turkish, click below:
http://www.siirpenceresi.com/sairsiir/seyhan_erozcelik.htm

Magpie in my larynx,
marten in my heart...
females jump

but now I'm hoarse.
Rosedusts escaped to my throat.
A thorn pricked my heel...
At my most delicate spot

Magpie in my larynx,
marten in my throat...

I looked at the moon, hit at the heel
This pain has no relief.
No one likes the moonstruck...

Now my larynx a magpie,
marten my throat,

While the marten's squinting
petals swim in my blood.

The marten's pumping blood to its thighs,
to my eyes.

—Translated from the Turkish by Murat Nemet-Nejat
(from Gül ve Telve, 1997)

This is the condition of the rose. we sit up,
leaving behind coffee cups
to their own.

Through reeds the marshes refract fractions of the moon.

—Translated from the Turkish by Murat Nemet-Nejat
(from Gül ve Telve, 1997)

Last night the rose passed,
passed into itself.
I passed myself,
passing out.
Angels laughed at me
and passed.
it seems the devil
made a pass.
Rose petals passing
round my belly,
I freeze into its
solitude.
Aching nu cle ar pain!
The fire having fooled me,
hitting on me,
is fueling me.
A shiver!
The devil's passed.
But you, my love!
What about you?
Lighting a rose's fire again,
you lit me up again.

—Translated from the Turkish by Murat Nemet-Nejat