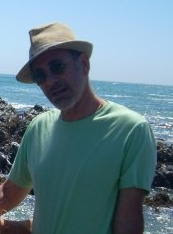 Born in Hollywood, Todd Baron was a child actor, performing in movies, television, and voice-overs, for twelve years. He attended Immaculate Heart College for two years, studying with Martha Ronk, and later—focusing on contemporary poetics—with Peter Levitt. In 1984 he moved to San Francisco, studying at New College with various California poets, including Robert Duncan, Michael Palmer, Lyn Hejinian, and Diane DiPrima. He earned his Master’s degree in poetics in 1989, returning to live in Los Angeles.
Earlier, Baron edited a journal, ISSUE (1982-1876) with Tosh Berman, and when that journal ceased, he began Re*Map (1989-2001). With Dennis Phillips, Martha Ronk and Paul Vangelisti, he co-founded Littoral books in 1991, a press that developed out of these poets’ relationships with Lee Hickman. In 1997 he and Noah De Lissovy ran a poetics reading series at Otis Art Institute (now Otis College of Art). Over the past few years he has written art criticism for various journals, including Artnews, Art Issues, and New Art Examiner.
Baron taught at the Otis Art Institute, Los Angeles City College, and West Los Angeles College. For the past eight years, he has taught at the Crosssroads School for the Arts and Sciences in Santa Monica. He also continues to work with film, serving as a literary consultant to Klasky Csupo animation studios.
Although clearly influenced by his various teachers along the way, particularly in connection with their relations to “Language” poetry, Baron’s writing is often centered on a fludity of movement in line and meaning strongly influenced by film.

I want to write, and writing, write.
so in the effusion,
deems, willow’d, branched,
comes a day. And there,
here she says,
moving in unmoving ways, chords so tight you fall be-
loved, into & out of
pitch-syllable. poverty of glance
tress by a pin hole, someone coming
takes this back from where it came,
the text & the text, for texture,
in tnets not in caves, so in the final sense
are other’s language. book on the table
cup in the mask,
sun sticks in a circle of fire,
first rock or orb I thought would covet thee. that I could love
blood flukes, despair & unbelief, that ‘til my spirit
rises, they raise. sit, stare
sighted, open in summer, to park, stare
or place.

what is it, without image, metaphor, or doubt—

summer comes as fall approaches,
unstead and distressed to see.

chained to circumstance, brown
flora & other marks whose name

the sound of a chair, wakes
the middle of day, scrawling

sound of the bed, the floor, bereft
of nobility. the dream

in a dreamer’s dream, coming
in a room, bored with reason,
even with reasoning. even the want
of need, & back again, a like-

geometry. a game, counting
windows by the road,

sitting on the deck, what passes for
silence as if it were a figure

gesturing the hand. Bearing
each hand back towards

what is this interior motivation—

to be given strength for everything
that blends into one. The vast

bordering the field. Or is it
entrapment I meant to find

how beautiful and delicate, even
fragile, the framed

sad head was. A statue
a running set of monologues,

gripless and fortunate, wavering
indecision like a mask amid tracing elements.

the period the flower
of even questions asked.

is it moments, out of place, there’s dust on the floor—

the particular means of a particular shape.
is it morning & the fall and rising of sheets,

drapes, not the window or cars going by
outside the door. or the motion of sleep

augment the self the untouched key
remembers. This, then in being,


he wanted the experience back & into
the narrow regions the music

telling & from the distance toward he fixture
the camera moving clapping

where the travels would each
& after sleep only

the abundance of inactivity
the tangle of mass

Who made the track by signing addition
to avail a censor

originally a critic an opinion
not a contract rending throats

across the other other
Coined from steel both


A clump of citizens’ senses
a bulb or sphere stopped

to drag
without them & entrusted

The sound of the drifter
reading desolate isolation wintering

he said that she says writes
what she writes he says

the real who
unmystified forced to get out among branches

overcome with himself he
who writes it is

learning the letter’s pronounced
with only one tongue

only the thought
the remnant of time
(from Outside, 1995)

when you say (what
I think you say, that you prefer the
ordinarily immersed transcendental line,
what do you mean? For me
there is a secret to each
unraveling (like) film
moving an audience from one
matrix to the other . starting out to find
the “why of it” seems to generate
silence . (a squirrel
jumping from one tree,
the maximum of force
from which all things deliver.

I’ve known this conversation before,
and it’s ours, meaning
yours, mine and his, but I also love
The small & feel of the sun
on the balcony over the backyard
in the morning . waking
is constantly unattended, as if feeling
would rouse the day
as ciphers do, to find
a page that reads

each metamorphosis is there
when you’re ready.

entering what appears to be a long trance
or just sleeping too late even knowing
that the painting in the next room
is really a clock & the clock
over the fireplace an object
found on the street, shy
of what comes as intention
or judgment.

Outside the alphabet of each stone,
The idea baducted by loss
& the meaning of loss . the question of mis-
representation as a color of skin
or speech as the suns’ reflected
by trees & the artifice of buildings.

as a footnote then
the form of an apparent journal
by less caustic remarks . but the
remainder stays the same
because a voice
is common & prosaic
to the question of vanity
& number . (the gardener cuts
grass & the smell
the scarcity of change . no,
there must be presence to time
as if it were devotion.

so you add to each day
a monstrous figure undressed
or undressing each state
with less heart than mind,
an outline of spirit, feeling
& growth . (pinapple sage in a pot
by the window, direct & laconic,
wanting the sun.

the mind as part of the body respons to distinct imagery

trying to break things down.
because it is singular
in the world, sentiment
& disfigurement, caring &
the opposite of fiction . (like aloe
outdoors, what manner
is redundant, what
motive regurgitates sound?

Isolation respects the concept
of life, drunk or drinking
each doorway . my sense
of a house is one that’s
unnumbered, equally
held & unbroken . that night
we sat by the stairs,
thinking of parallel visions.

tender, beneficent favors,
water boiling (kindly
generous meanings . limbs still
carry the sail no matter how
avarice or self-centered
waking is . but does that change
the music of change?
rather, watch each fire
as sleep modifies
each pronoun’s response
to a place that seemingly
has no concept behind
or in front of—

one judgment, one logic
or symbol addressed.

[“I want to write, and writing, write.]
Reprinted from Return of the World (Berkeley: O Books, 1998). Copyright ©1988 by Todd Baron. Reprinted by permission of the author and O Books.

“(series of three)”
Reprinted from Tell (Norman, Oklahoma: texture press, 1995). Copyright ©1995 by Todd Baron. Reprinted by permission of the author.

“transparency,” “C” and “W”
Reprinted from Outside (Bolinas, California: Avenue B, 1995). Copyright ©1995 by Todd Baron. Reprinted by permission of the author.

“2” and “3”
Reprinted from That Looks at One and Speaks (San Diego: Factory School Books, 2001). Copyright ©2001 by Todd Baron. Reprinted by permission of the author.
Posted by greenintegerblog at 9:48 AM